Sea serpents are a kind of sea monster either wholly or partly serpentine. Despite the numerous sightings, though, no credible physical evidence has been recorded and it is currently believed that the serpents do not actually exist.

Sea serpent reported by Hans Egede, Bishop of Greenland, in 1734. Henry Lee suggested the giant squid as an explanation.

The "Great Sea Serpent" according to Hans Egede.

The Gloucester sea serpent of 1817. 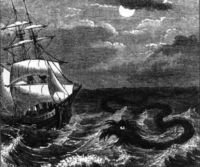 Albert Koch's 114-foot long "Hydrarchos" fossil skeleton from 1845. It was found to be an assembled collection of bones from at least five fossil specimens of Zeuglodon.

The "long black creature" sighted by the crew of HMS Plumper off the Portuguese coast in 1848.

The sea serpent spotted by the crew of HMS Daedalus in 1848.

Oarfish that washed ashore on a Bermuda beach in 1860. The animal was 16 feet long and was originally described as a sea serpent.

Those who sail up along the coast of Norway to trade or to fish, all tell the remarkable story of how a serpent of fearsome size, 200 feet long and 20 feet wide, resides in rifts and caves outside Bergen. On bright summer nights this serpent leaves the caves to eat calves, lambs and pigs, or it fares out to the sea and feeds on sea nettles, crabs and similar marine animals. It has ell-long hair hanging from its neck, sharp black scales and flaming red eyes. It attacks vessels, grabs and swallows people, as it lifts itself up like a column from the water.

"With a conviction that grew deeper, and ever more disquieting, we came to know that this thing could be no :derelict, no object that hand of man had fashioned..." reported Grey. He described a head that emerged out :of water on a tall and powerful neck. It was "dragon-like" and accompanied a body some 100 feet in length :and eight feet across at the widest. The head was five feet long and eighteen inches in diameter.

There was concern that the ship, running light without cargo, might be tipped and overturned if the :creature attempted to clamber aboard.

"Presently I noticed something dripping from the ugly lower jaw," continued Grey, "Watching, I saw that it :was saliva, of a dirty drab color, which dripped from the corners of the mouth." Eventually the creature :turned away and the danger was averted.|}

Cryptozoologists may further argue for the existence of sea serpents by pointing out that people see similar things, and it is possible for them to classify the different "types". While there have been different classification attempts with different results, they all share several common characteristics.

The Type 2A sea serpent according to Cameron McCormick. Drawn July, 2005.