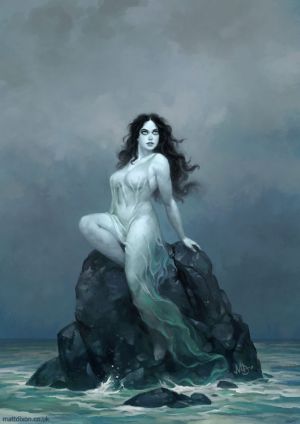 A selkie (also known as silkie or selchie) is a shapeshifter creature in Faroese, Irish, Icelandic, and Scottish mythology.

The legend apparently originated on the Orkney Islands, where selch or selk(ie) is the Scots word for seal (from Old English seolh).

Selkies are most commonly found off the shores of Scotland (particularly on the Northern Islands including Orkenys, Shetlands and Herbides), and in Ireland along with some traces throughout Britain and to an extent, Iceland and Norway. Norsemen who arrived at Orkney in the 8th century named it "Orkenyjar" the seal islands. The legends of the selkies are most common in areas where seals and people lived side by side which would explain many of the islands.

Selkies are able to transform to human form by shedding their seal skins and can revert to seal form by putting their selkie skin back on. When in human form, both sex are described as handsome and seductive. Male selkies typically seek those who are dissatisfied with their romantic life. This includes married women waiting for their fishermen husbands.

The song of the selkies is called Dan nan Ron or song of theseals, which is suposed to be quite human-like. Selkie folk are also said to have a faint glimmer surrounding them, making them appear even more enchanting

Selkies of the unseelie court are said to be the ones responsible for creating storms that sink ships and destroy property for purpose of avenging kin that were harmed by hunters. The selkies of the seelie court, known as roanes, are said to be soft hearted and shy. Although they will avenge kin, they are harder to anger. But if a good deed is done to them, many times they pay the mortal back by saving their lives if they are ever drowning at sea.

Popular nights to come accross a selkie in human form was on Midsummer´s night and All Hallows, two nights that are festivals of the fae. Some think that these are the only days that they can come ahore while others think tha thtey most often come to shore on these days to participate in the festivals.

Selkie legend always has heartbreak intertwined into it when selkies and mortals come together. No matter how strong a selkie loves a mortal the pull of the sea is always stronger and they always end up leaving their mortal lovers and sometimes the children that had come of the union. 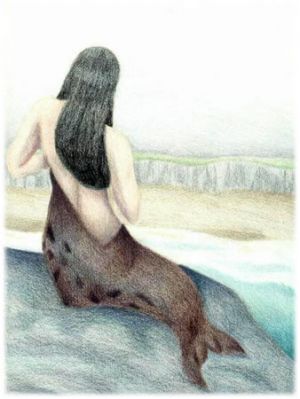 If there are children that result from the union, the selkie man will sometimes come back after 7 years to claim his child to take with him back to the sea. In return he pays the mother for looking after her own child for the seven years and she never sees them again. Female Selkies often are tricked into having a relationship with mortal man. A common tale is how a man will spy selkies sitting upon a rock in human form. He will sneak up and steal the skin of one and then approach her. Agreeing to be his wife she leads a life as a mortal until she can find her skin. Most often it is the children who find the skin and return it to their mother and sometimes she takes them with her back to the ocean but she always leaves. Some tales tell how after returning to the water she keeps watch over her children and husband and helps them in anyway she can (such as ensuring prosperous fishing or saving them in a middle of a storm).

A selkie´s skin is what allows them to transform from human to seal. Each skin is individual, which means that the skin only works for the selkie that it belongs to. No one can use the skin to transform into a seal except the selkie. Without their skins, selkies are stuck in human form, which is like torture as they are more at home then in the sea and they can only stay on land for a short time before the need to return to the sea is overwhelming. A selkie skin is quite enchanted in that if it is ever lost, it always finds its way back to the selkie, even if it takes 100 years. Selkies are often careful about hiding their skin before venturing to land to ensure safe return to the sea should they need to in a hurry. If a skin is taken from a selkie (which is quite common in tales of men who would take selkie maiden to be his perfect wife) she will look for the skin until she is successful (usually with the help of her children) and without hesitation for her husband or family on land, she returns to the sea. There are several theories of what happens to a selkie if her skin is destroyed. One theory suggests that she dies and others suggest that she is doomed to be miserable forever as a human. Several tales tell of hunters that skin a seal to find a transformed human who then bargains back the return. 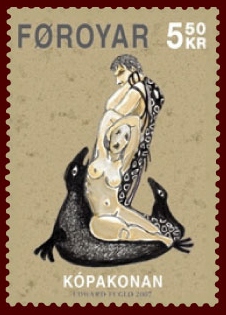 A Faroese stamp depicting the capture of a seal woman

Stories concerning selkies are generally romantic tragedies. Sometimes the human will not know that their lover is a selkie, and wakes to find them gone. Other times the human will hide the selkie's skin, thus preventing them from returning to seal form.

Author Uknown
An Earthly nurse sits and sings,
And aye, she sings by lily wean,
And little ken I by Bairn´s father,
Far less the land where he dwells in.
For he came one night to her bed feet,
And a grumbly guest, I am sure was he,
Saying "Here am I, they bairns father,
Although I be not comely.
I am a man upon the land,
I am a selkie on the sea,
And when I´m far and far frae land,
my home it is in Sule Skerrie."
And he had ta´en a purse of gold,
And he had placed it upon her knew,
Saying: "Give it to my little young son,
And take thee up they nurse´s fee."
"And it shall come to pass on a summer´s day,
When the sun shines bright on every stane,
I´ll come and fetch my little son,
and teach him how to swim the faem."
"And ye shall marry a gunner good,
And a right fine gunner I´m sure he´ll be,
And the very first shot that he e´er shoots,
Will kill both my young son and me."

Part of this article consists of modified text from Wikipedia, and the article is therefore licensed under GFDL.
Retrieved from "https://www.monstropedia.org/index.php?title=Selkie&oldid=15713"
Categories: