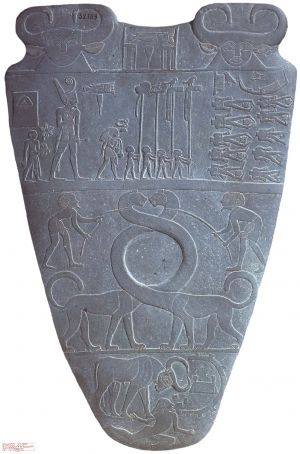 The serpopard is a fabulous animal known from Ancient Egyptian depictions.

The image is featured specifically on decorated cosmetic palettes from the Pre-Dynastic Period. Examples include the Narmer Palette and the Small Palette of Hierakonopolis.

The serpopard is a hybrid between a serpent and leopard, and is supposed to feature the body of the latter and a long neck and head representing the former. The image generally is classified as a feline, however, and resembles an unusually long-necked lionesses instead, for there are no spots, the round-eared head most closely resembles the lioness rather than a serpent, and there are no serpent features such as scales, tongue, or head shape.

Lionesses played an important role in the religious concepts of both Upper and Lower Egypt and are likely to have been designated as animals associated with protection and royalty. The long necks may be a simple exaggeration, used as a framing feature in an artistic motif, either forming the cosmetic mixing area in the Narmer Palette or surrounding it in the Small Palette.