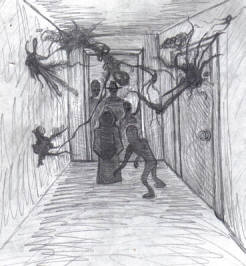 An artist's conception of shadow people.

Shadow people (also known as shadow men or shadow beings) are a supernatural phenomenon reported by some individuals. Most accounts of shadow people describe them as black humanoid silhouettes, lacking mouths or eyes, although they are sometimes reported to have red or yellow eyes. They are generally described as lacking mass, although their specific nature varies from two-dimensional (like a shadow) to vaporous or distorted. Their movement is often reported as being very quick and disjointed, or "jiggly", in the sense that they first may move slowly like a fluid (similar to jello rather than water), then rapidly "hop" to another part of a witness' surroundings. Some witnesses describe this movement as though the shadow entities they have seen "danced" from one wall to the next.

Observers of shadow people most commonly report that the forms appear at the edge of their field of vision, and that they disintegrate or move into walls when noticed, usually within a split second. However, many also report shadow people appearing in the center of their vision, appearing very close to them, or remaining for several seconds before disappearing. Some individuals have described being menaced, chased, or (more rarely) attacked or raped by shadow people.

Sightings of shadow people have been reported all over the world. They are a recurring topic of the late-night talk radio show Coast-to-Coast AM. The former host of the show, Art Bell, seemingly resurrected the term "shadow people." The term appeared as early as September 21, 1953 as the title of a radio drama that was broadcast on Chicago's WGN-AM "Hall of Fantasy"* series. However, reports of beings fitting the description of shadow people have been recorded for centuries in literature. For example, in 1887, celebrated French author Guy de Maupassant pennned the story "Le Horla" ("The Horla") about shadowy beings who live on milk and water, bedevil human minds, and stalk the unwary.

Even though these creatures were never proven to exist, sightings appear to occur most often in Rhode Island and North Carolina in the United States of America.

This category falls into drugs use, seizures, and other mental issues. This category covers a very vast description and is known to have descriptions that may or may not match what others describe in category 2 and 3. Category 1 actually may not be considered shadow people at all due to the non consistancy in the descriptions.

Alleged eyewitness accounts of shadow people differ from those of ghosts in many respects. Ghosts are said to be the disembodied spirits of people and are usually said by alleged eyewitnesses to take on the appearance of people, orbs, or mist when seen.

While ghosts are often said to resemble actual people, accounts of shadow beings generally do not. Although accounts describe shadow beings as having humanlike form, they are generally not described as resembling actual individuals (living or deceased or deive). The cause of shadow people or shadow beings is also not generally attributed to be haunting by ghosts.

Since accounts of ghosts and shadow people are anecdotal and have not been scientifically verified, such differences are not conclusive.

Alleged eyewitness reports of these beings are often similar. In these accounts there are almost always the same forms: a blob-like cluster that sometimes has tendrils, a child-sized being, sometimes with a hood, a tall willowy figure with a jack-o'-lantern-sized head, and a tall figure with a hat. In these accounts, the figures typically follow a progression from the ambiguous blob and finally the tall man, meaning that over time they take on more human appearance. Much less frequently red glowing eyes are reported. Some witnesses also claim to have been attacked, resulting in scratches, bruises, or burns.

The more consistent accounts typically describe a feeling of dread associated with the presence of these phenomena, and animals are said to react to the phenomena with fear and hostility. Shadow Beings are said to move extremely fast and travel through solid matter. They typically are said to have no discernable features such as mouths, noses, or eyes. Their forms are usually described as somewhat skeletal or thin. Direct visual contact is rarely reported by alleged eyewitnesses with shadow people; they are said to usually disappear before they can be seen clearly, and are seen "in the corner of one's eye." These beings are said to often appear in mirrors.

Heidi Hollis, researcher on Shadow People, has come up with some very generalized information on Shadow People. She has appeared on Coast To Coast AM several times. Taken from coasttocoastam.com:

Shadow people have been around since the beginning of time and are a dark influence upon society, she said. They also relate to negative alien entities such as the Reptilians and Greys (alien species), and may in fact be part of the same overall phenomena, she added.

Typically, shadow beings don't like to be spotted but they are sometimes discovered by a person who wakes up to find them trying to choke or suffocate them, noted Hollis, who presented several methods for decreasing or eliminating incidents with them:

A type of shadow being referred to as the "Hat Man" is actually more akin to the devil or a demon, Hollis revealed. He is often seen wearing a fedora hat, trench coat and three-piece suit, and might appear more solid than other shadow entities. She suggested that these very negative beings are seeking to increase their numbers by recruiting an army of people to the dark side.

Several explanations have been proposed for the appearance of shadow people.

Some explanations for shadow people come from the fields of parapsychology, metaphysics, cryptozoology, and demonology, and are considered by many to be pseudoscience. Other explanations make no scientific pretense whatever, and lie more within the realm of religion and the occult.

Eyewitness accounts of shadow people are neither hoaxes nor actual paranormal experiences, but rather hallucinations or delusions.

The similarities between eyewitness accounts of shadow people remains difficult to explain scientifically. In particular the tall gingerbread-like man with a hat that is reported as often by 4-year-old children as with adults. The similarities may, however, simply reflect common archetypes.

Many people who have experienced nightmares, especially during childhood have seen an entity that fits this description. In many cases, this being is of indisputable power during the dream sequence, and frequently chases the one experiencing the nightmare relentlessly. Whether or not a shadow being is playing games with them in their dreams or merely their own imagination running wild is impossible to assess. Frequently this dream is not a single occurrence, and is sometimes every single night, which can lead to sleep deprivation, somniphobia (clinical fear of sleep), nyctophobia (fear of night time or darkness, with which both sleep and the shadow being would be associated).

The Shadow and Neo-Shadow Heartles of the Kingdom Hearts series bear a striking resemblance to shadow people both in their appearance and in their movement patterns.

The elder scrolls has mention of shadow people.

Part of this article consists of modified text from Wikipedia, and the article is therefore licensed under GFDL.
Retrieved from "https://www.monstropedia.org/index.php?title=Shadow_people&oldid=13926"
Categories: