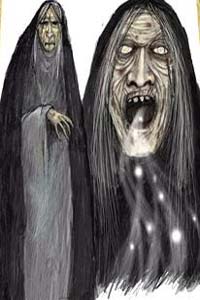 In Albanian folklore a shtriga is a witch who preys upon infants by drinking their blood at night. But instead of transforming into an owl when she goes for her midnight snack, she is more apt to take the form of a flying insect.

The Shtriga is often pictured as a old woman sometimes having horribly disfigured face with washed out colour eyes (sybardha) and crocked nose.

The shtriga would turn into a flying insect then suck the spirtus vitaé, the living force, out of people at night while they slept. She preferred to drink from young children or even infants. Only the shtriga herself could cure those she had drained (often by spitting in their mouths), and those who were not cured inevitably sickened and died.

How to ward off a Shtriga

Traditionally there are several methods effective for defending oneself from shtriga, such as:

Even recently many Albanians regard the Shtriga as the most common cause of infant deaths.

The shtriga is related to other witch/vampires such as the Romanian strigoi and the Roman strix.

TV series Supernatural, in the episode "Something Wicked", featured a shtriga. Although there is no mentioned method for destroying shtriga in folklore, the show stated that the shtriga may be killed by a consecrated iron bullet, but only when it was feeding.

Part of this article consists of modified text from Wikipedia, and the article is therefore licensed under GFDL.
Retrieved from "https://www.monstropedia.org/index.php?title=Shtriga&oldid=16772"
Categories: