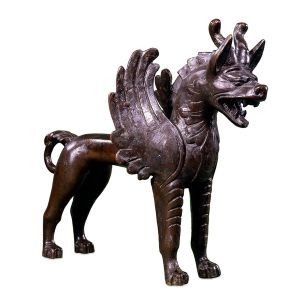 Parthian or Sasanian, about 3rd century AD, said to have been found near the Helmand River, Afghanistan. British Museum.

Simurgh or Simorgh also known as Angha is the modern Persian name for a fabulous, benevolent, mythical flying creature similar to a griffin or phoenix. The figure can be found in all periods of Greater Iranian art and literature, and is evident also in the iconography of medieval Armenia, Byzantium and other regions that were within the sphere of Iranian cultural influence.

The name 'Simorgh' (Persian: سيمرغ) derives from Middle Persian Pahlavi Senmurv, Sēnmurw (and earlier Sēnmuruγ), also attested in Middle Persian Pāzand as Sīna-Mrū. The Middle Persian term derives in turn from Avestan mərəγō Saēnō "the bird Saena", originally a raptor, likely an eagle, falcon or sparrowhawk, as can be deduced from the etymologically identical Sanskrit śyenaḥ that also appears as a divine figure. Saena is also found as a personal name which is derived from the bird's name.

"Si-", the first element in the name, has also been connected in folk etymology to Modern Persian si ("thirty"). Although this prefix is not historically related to the origin of the name Simorgh, "thirty" has nonetheless been the basis for legends incorporating that number, for instance, that the Simorgh was as large as thirty birds or had thirty colours (siræng).

At the time of the Sassanian dynasty, the Simurgh was pictured as having the foreparts of a dog, the wings and tail of a peacock and the claws of a lion, gigantic enough to carry off an elephant or a whale.

However, as the centuries progressed and mercantile exchange between Persia and China became commonplace, the aesthetics of both these cultures heavily influenced each other. As we see in this Persian illustrated manuscript dating to the late fifteenth or early sixteenth century, the griffin-like image of the Simurgh had been replaced with that of the huang, a mythical Chinese bird known in English as the phoenix.

The simorgh is inherently benevolent and unambiguously female. Being part mammal, she suckles her young. The Simorgh has teeth. It has an enmity towards snakes and its natural habitat is a place with plenty of water.

Simurgh resides in the Tree of Life (or White Haoma tree) that is laden with seeds from all the plants in the world and is explicitely tied to the "Water of Life." Together with the great fish Karn, the Simurgh protect the Tree of Many Seeds and the Tree of Knowledge. The Simurgh also lives on the mountain Alburz. Iranian cosmology places the cosmic mountain at the farthest shore of the Varkash Sea to the East. which is portrayed usually with a dog or human head.

Iranian legends consider the bird so old that it had seen the destruction of the World three times over. The Simorgh learned so much by living so long that it is thought to possess the knowledge of all the Ages. In one legend, the Simorgh was said to live 1700 years before plunging itself into flames (much like the phoenix). The simurgh is associated with the Tree of Life and present in many old tales of the creation. He is benevolent, protective guardian figure with healing powers. Its touch is supposed to heal even the direst of wounds.

The Simorgh was considered to purify the land and waters and hence bestow fertility. The creature represented the union between the earth and the sky, serving as mediator and messenger between the two. The Simorgh roosted in Gaokerena, the Hom (Avestan: Haoma) Tree of Life, which stands in the middle of the world sea Vourukhasa. The plant is potent medicine, is called all-healing, and the seeds of all plants are deposited on it. When the Simorgh took flight, the leaves of the tree of life shook making all the seeds of every plant to fall out. These seeds floated around the world on the winds of Vayu-Vata and the rains of Tishtrya, in cosmology taking root to become every type of plant that ever lived, and curing all the illnesses of mankind. 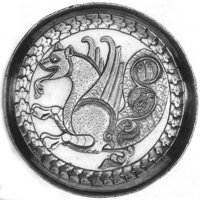 The Simurgh is promenantly featured in the Ferdowsi's epic Shahname (Book of Kings), an epic poem that describes the legendary kings of Persia. In this poem, Zal, the son of Saam, was born albino. When Saam saw his albino son, he assumed that the child was the spawn of devils, and abandoned the infant on the mountain Alborz. The child's cries were carried to the ears of the tender-hearted Simorgh, who lived on top this peak, and she retrieved the child and raised him as her own. Zal was taught much wisdom from the loving Simorgh, who has all knowledge, but the time came when he grew into a man and yearned to rejoin the world of men. Unfortunatly he cannot reach the home of the gods. Simurgh sees him and pities him. She takes Zal to his father and gives him one feather that he can use to summon her when in great need. Upon returning to his kingdom, Zal fell in love and married the beautiful Rudaba. When it came time for their son to be born, the labour was prolonged and terrible; Zal was certain that his wife would die in labour. Rudabah was near death when Zal decided to summon the Simurgh. The Simorgh appeared and instructed him upon how to perform a cesarean section thus saving Rudabah and the child, who became one of the greatest Persian heroes, Rostam.

Through cultural assimilation the Simurgh was introduced to the Arabic-speaking world, where the concept was conflated with other Arabic mythical birds such as the Ghoghnus and developed as the Rukh (the origin of the English word "Roc"). 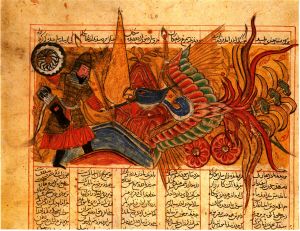 The Simurgh, Truth's last flawless jewel, the light
In which you will be lost to mortal sight,
Dispersed to nothingness until once more
You find in Me the selves you were before.'"
-Mantiq al-Tayr, or the Parliament of Birds

In the 12th century Conference of the Birds, Iranian Sufi poet Farid ud-Din Attar wrote of a band of pilgrim birds in search of the Simurgh. According to the poet's tale, the Simurgh has thirty holes in her beak and drew the wind through them whenever she was hungry.

The king of birds Simurgh drops a feather, when the other birds hear this they try to seek him out. Knowing that the king's name means thirty birds and that he lives in the mountains of Kaf. The birds travel to Kaf, among the way all but thirty of the birds quit the quest. When they finally reach Kaf they find out that they are the Simurgh and the Simurgh in in each of them. In another tradition, the birds gathered at the peak of a mountain where they were eaten by the Simurgh.

The relationship between the Simorgh and the Hom is extremely close. Like Simurgh, Hom is represented as a bird, a messenger, and as the essence of purity that can heal any illness or wound. Hom - appointed as the first priest - is the essence of divinity, a property that it shares with Simorgh. The Hom is in addition the vehicle of farr(ah) (MP: khwarrah, Avestan: khvarenah, kavaem khareno) "[divine] glory" or "fortune". Farrah in turn represents the divine mandate that was the foundation of a king's authority. It appears as a bird that rests on the head or shoulder of would-be kings and clerics, so indicating Ormuzd's acceptance of that individual as His divine representative on earth. For the commoner Bahram wraps fortune/glory "around the house of the worshipper, for wealth in cattle, like the great bird Saena, and as the watery clouds cover the great mountains" (Yasht 14.41, cf. the rains of Tishtrya above). Like Simorgh, farrah is also associated with the waters of Vourukasha (Yasht 19.51,.56-57).

Part of this article consists of modified text from Wikipedia, and the article is therefore licensed under GFDL.
Retrieved from "https://www.monstropedia.org/index.php?title=Simurgh&oldid=10237"
Categories: