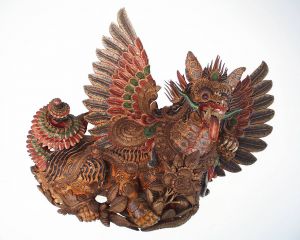 The Singa is a mythical creature of the Indonesian Batak people who live in the mountains in Sumatra.

Although the name means "lion", it resembles no living creature. Its representation, generally confined to the head, varies between the buffalo and a distorted human figures. Later it has been somehow merged with the dragon, Garuda and even the phoenix. Represented characteristics in Batak art are invariable the bilateral symmetry, the lengthened face, and round impressive eyes, occasionally accompanied by highly developed eye-brows (which at time are depicted almost like antlers).

The Singa is the dominant theme of Batak decoration, particularly among the Toba Batak where it is to be found on houses, domestic utensils, wooden coffins, stone sarcophagi, copper jewelry, etc. Its omnipresence would seem to indicate above all a protective role. 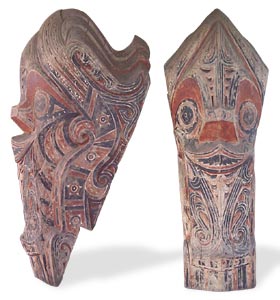 Like the Toraja, their distant cousins in Madagascar, the Batak perform elaborate funerary ceremonies that involve digging up and reburying bones. The skulls of their leaders are interred in boat-like, stone sarcophagi, with a singa carved on the prow. At a traditional funeral you might see a sigalegale dance: life-sized puppets carved from the wood of the tree of life, the banyan. The puppet wears a red turban, a loose shirt, a blue sarong and stands on a long wooden box to dance to the gamelan, the flute and the drums.

The first sigalegale was made in his image by a widow mourning her husband; she would hire a dukun (a shaman) to bring his soul and a dalang (a puppeteer/story-teller) to work the sigalegale. The custom spread: at funerals, the puppet would be decorated with the dead person’s things and the soul of the deceased invited to enter it. Nowadays, however, sigalegale dance more at a wedding than at funerals.