The sirrush or mushussu is a dragon in Babylonian and Akkadian mythology which guards the Ishtar Gate of Babylon. It is also known as the Babylon dragon of Chaos. 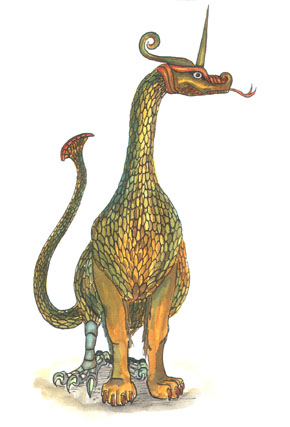 The name "sirrush" is derived from an Akkadian word loosely translated "splendor serpent." Although it is properly transliterated mûš-ruššû, early researchers mistakenly read it as sîr-ruššû, and this is the rendering most common today.

Muhussu is a huge creature, often depicted with the fore feet of a cat, the back legs of a clawed bird, a serpent's body, and a scaled head. Its tail ends with a poisonous sting. It resembles a scaly dragon with hind legs like an eagle's talons and feline forelegs. It also has a long neck and tail, a horned head, a snakelike tongue and a crest.

The Muhussu was originally an attendant on Ninazu, the city god of Esnunna. It was 'inherited' by the god Tispak when he replaced Ninazu as city god in the Akkadian or early Old Babylonian Period, and in Lagas became associated with Ninazu's son Ningiszida. Possibly after Hammurabi's conquest of Esnunna, the creature was transferred to the new Babylonian national god, Marduk, and later to Nabu. The conquest of Babylon by the Assyrian king Sennacherib (reigned 704-681 BC) brought the motif to Assyria, normally as the beast of the state god Assur. On Sennacherib's rock reliefs at Maltai, however, the creature accompanies three different gods, Assur, Ellil (Enlil) and another god, most likely Nabu.

Bel and the Dragon, a deuterocanonical Biblical text, relates a story that Koldewey thought involved a sirrush. In a temple dedicated to Bel (Nebuchadnezzar's god), priests had a "great dragon or serpent, which they of Babylon worshiped." Daniel, the Biblical prophet, was confronted with this creature by the priests, who challenged him to match his invisible God against their living god. Eventually, Daniel poisoned the creature. The creature's distinctly feline front paws seemed incongruous, and gave Koldeway some doubt. However, In 1918 he proposed that the iguanodon, (a dinosaur with birdlike hindfeet) was the closest match to the sirrush (Sjögren, 1980). 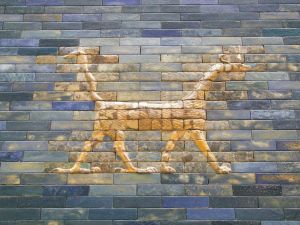 The Ishtar Gate at Babylon.

While not matching any known creature, some argue the sirrush could have been a genuine animal.