The Sisiutl is a two-headed sea serpent of the Kwakiutl culture (Pacific coast region of North America). 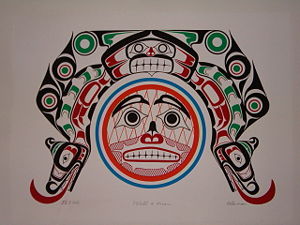 Several native representations of the creature have been retrieved; all depict a long, serpentine animal with small forelimbs and a dog like or crocodilian head. Reports that the creature has an identical head at each end, with a human face are mistaken.

A vivid description of the monster appears in an Indian legend:

Shortly the water of the lake began to churn, and the head and finned for elegs of the Sea-Wolf, which some call the Wasgo, appeared near the surface. As the huge beast rose through the open trap, snapping at the bait...the split cedar snapped shut on the monster, breaking its back. In spite of this injury, the Sea-Wolf snarled and pawed and thrashed.

Flakes of shiny mica found on beaches were thought to be the discarded scales from the serpent’s body.

As far north as Alaska, the Inuit (Eskimos) spoke of the tirichik, mauraa, nikaseenithulooyee, akhlut, or palraiyuk, a creature which seems analogous with the Sea-Wolf of further south, if not for its six legs.

Sisiutl guarded the entrance to the homes of the supernatural in the area of British Columbia coast and Vancouver Island. It was painted on the sides of canoes and hung over doorways to protect the inhabitants from evil spirits.

On sculpture, paintings and decorations, Sisiutl is always portrayed with a human face at the center of the body. From each side of the central head protrudes an appendix which terminates with a head at each end, traditionally a head in profile. All three heads share similar features. Each has a set of curl ing horns and large round nostrils. The face in the central position is more like that of a human, the eyes are rounded and the mouth shows full teeth which are sometimes pointed. The heads at the protruding ends are less like human heads and display a mouth with well-defined canine teeth and a long tongue which protruding like that of the serpent.

Tuxw'id (female warrior) dancers often in corporate Sisiutl in their performance, invoking Sisiutl to grant them the power of Winalagilis (warrior spirit): invincibilty and immunity from pain. They may be seemingly pulled underground by a Sisiutl, or demonstrate their power by summoning No’nlEmg i.a figures (dantsikw dance boards) to rise from the earth (abstract representation of Sisiutl). Supernatural powers bestowed by Sisiutl might be theatrically demonstrated by 'miraculously' suriving burning alive, or being decapitated. 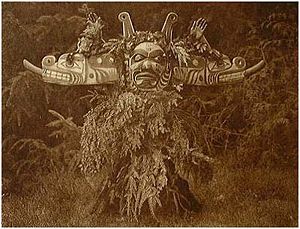 One of the principal dancers of the Kwakiutl Winter Dance. When the dancer enters the house where the dance is taking place he dons his mask, representing the double-headed sea serpent. In addition to his mask, the dancer's costume includes a shirt of hemlock boughs.

One of the principal dancers of the Kwakiutl Winter Dance. When the dancer enters the house where the dance is taking place he dons his mask, representing the double-headed sea serpent. In addition to his mask, the dancer's costume includes a shirt of hemlock boughs.

Thunderbird and his wife came down to start their own tribe. As a human male Thunderbird caught a strange looking salmon which died only when Thunderbird bit his own tongue and spat blood at the creature. At that time he recognized the creature as Sisiutl . His wife thanked him for the gift of Sisiutl which she cut in half, bathing their newborn son in Sis iutl's blood. As a result, the child grow quickly into a giant man with a pursed mouth, who appeared made of stone. The parents were pleased as a child would be a great warrior. When the child became the man he received a special death-bringing canoe with which he could fight with the world. Each end of the canoe had a serpent head with a protruding tongue. At the center of the canoe was the head of the man. The canoe would propel itself when given navigational directions and would bring wealth, prerogati ves and slaves. Thus, Sisiutl is associated for this reason with Warriors.

Sisiutl is a water dragon and as such carry the symbolic of wetness and fluidity representing at the same time tears, blood, sea, and rain. This fluidity also represents changes in life; death, decay and rebirth.

The Kwakiutl tribe, who lived on the British Columbian coast north of the present city of Bella Coola specified that sisiutl was an animal that was "of the earth", not one of the mythical creatures of the sea; this distinctly shows that the Pacific Northwest tribes were convinced of the animal's existence.

On the other hand, cryptozoologists have converged upon the tentative conclusion that an unclassified sea-animal of significant size is living, or at least recently lived, in the ocean waters of British Columbia. This animal has had several names within the various Amerindian cultures of that area, and has had a history among them for many centuries. The animal species may be identical or similar to other reported or historically pictured creatures worldwide.

Roy P. Mackal sums up reports of Canadian lake serpents in “Searching for Hidden Animals”; the picture he ends up with is of a creature very much like the Sea-Wolf. He goes on to speculate that the lake monsters are actually a surviving populations of a type of primitive whale called a zeuglodon. Is the Sea-Wolf, too, a zeuglodon? As a final note, depictions of what may be the same animal as the Sea-Wolf have been found as far south as the Nazca Plain, in Peru. One of the famous "Nazca lines" depicts a whale-like sea monster, complete with two forelimbs, crocodilian snout, and large eyes.