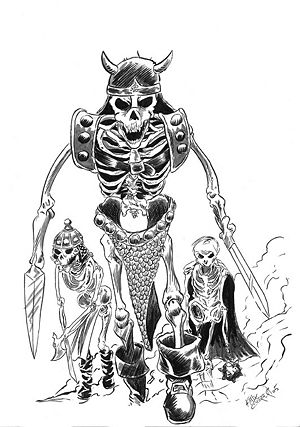 An animated skeleton is a type of physically manifested undead often found in fantasy, horror fiction, and mythical art. Though most are human skeletons, they can also be from any creature or fantasy race found on Earth or in a fantasy world.

Undead skeletons play a more active, and less symbolic, role in modern fantasy fiction. Skeletons are fallen creatures that have been summoned from beyond the grave normally of fallen warriors on battles of long past. Skeletons might be given 'life' by a more powerful undead or necromancer.

Reanimated by dark magic powers; skeleton follow their master’s orders without questioning. They appear a mindless set of animated bones, brutal and virtually immune to a piercing attack that would only harm the flesh they lack.

In many stories, legions of undead skeletons are raised as perfectly obedient and expendable foot-soldiers or guards. Since most skeletons are controlled by something else, they cannot make their own intelligent decisions, and can easily be led into ambushes, traps, or hazardous terrain.Certain abilities are lost when creatures are animated, such as naga and snake venom.

Fairly weak individually, their strength lies in numbers, like zombies.

Edged and piercing weapons, such as swords and arrows, are mostly ineffective against skeletons; only blunt weapons, such as war hammers, are effective at knocking the bones apart. Liches, which are typically intelligent and powerful spellcasters, might be mistaken for a simple animated skeleton. Clerics often have the ability to repel or destroy undead creatures, of which animated skeletons are usually the weakest such adversaries. Animated skeletons are not coerced by many effects of spells and combat; they cannot be unconscious or tired.

Both games contained Spinal, a animated skeleton that fights with a sword and shield.

Part of this article consists of modified text from Wikipedia, and the article is therefore licensed under GFDL.
Retrieved from "https://www.monstropedia.org/index.php?title=Skeleton&oldid=16091"
Categories: