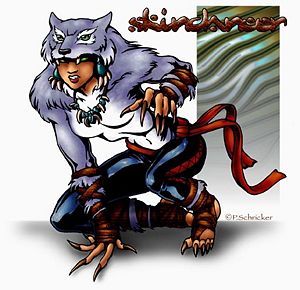 In some Native American traditions (Navajo, Hopi, Mohawk...) the skin-walker or yeenaaldlooshii is a human who is able to shapeshift into various animal forms through witchcraft. Skin-walkers are generally considered frightening, evil, dangerous, and difficult to kill.

Yeenaeldooshi means literally "with it, he goes on all fours" in the Navajo language. The Mohawk Indian word "limikkin" is sometimes used to describe all skin-walkers.

A skinwalker is usually described as naked, except for a coyote skin, or wolf skin. Some Navajos describe them as a mutated version of the animal in question. The skin may just be a mask, like those which are the only garment worn in the witches' sing. The skinwalkers are described as being fast, agile, and impossible to catch. Though some attempts have been made to shoot or kill one, they are not usually successful.

Skin-walkers sometimes transform themselves into animals simply for the purpose of traversing great distances quickly. They may also transform in order to wreak havoc on others, as their identity will be hidden and they will be able to escape quickly if necessary.

A skin-walker typically wears the pelt of the animal he or she will transform into, usually with no other clothing. Because of their association with skin-walkers, wild animal hides are taboo in Navajo culture and rarely seen.

"They curse people and cause great suffering and death," one Navajo writer explained. "At night, their eyes glow red like hot coals. It is said that if you see the face of a Naagloshii, they have to kill you. If you see one and know who it is, they will die. If you see them and you don't know them, they have to kill you to keep you from finding out who they are. They use a mixture that some call corpse powder, which they blow into your face. Your tongue turns black and you go into convulsions and you eventually die. They are known to use evil spirits in their ceremonies. The Dine' have learned ways to protect themselves against this evil and one has to always be on guard."

Similar creatures can be found in numerous cultures' lores all over the world, closely related to beliefs in werewolves (also known as lycanthropes) and other "were" creatures (which can be described as therianthropes). While the skin-walker is known mainly from Navajo folklore, analogies exist in the mythology of other tribes, including the Mohawk, Hopi, and Aztecs. The Yaqui have a similar creature they call Morea-kame. this is a person who practices witchcraft or what we might ball black magic. These creatures also change shape, appearing as animals or even as ghosts. They kill using their thoughts or the evil eye.

In ancient Hopi culture there was a ritual ceremony once performed called the Ya Ya Ceremony. In this ceremony members would change themselves into various animals using the hide from the animal they chose, and the members use certain animal attributes like sight, strength,etc. The ceremony was banned after members developed a disease of the eyes.

One story told on the Navajo reservation in Arizona concerns a woman who delivered newspapers in the early morning hours. She claims that, during her rounds, she heard a scratching on the passenger door of her vehicle. Her baby was in the car seat next to her. The door flung open and she saw the horrifying form of a creature she described as half-man, half-beast, with glowing red eyes and a gnarly arm that was reaching for her child. She fought it off, managed to pull the door closed, then pounded the gas pedal and sped off. To her horror, she says, the creature ran along with the car and continued to try to open the door. It stayed with her until she screeched up to an all-night convenience store. She ran inside, screaming and hysterical, but when the store employee dashed outside, the being had vanished. Outsiders may view the story skeptically, and any number of alternative explanations might be suggested, but it is taken seriously on the Navajo reservation.

Although skinwalkers are generally believed to prey only on Native Americans, there are recent reports from Anglos claiming they had encountered skinwalkers while driving on or near tribal lands.

Once Caucasian family still speaks in hushed tones about its encounter with a skinwalker, even though it happened in 1983. While driving at night along Route 163 through the massive Navajo Reservation, the four members of the family felt that someone was following them. As their truck slowed down to round a sharp bend, the atmosphere changed, and time itself seemed to slow down. Then something leaped out of a roadside ditch at the vehicle.

"It was black and hairy and was eye level with the cab," one of the witnesses recalled. "Whatever this thing was, it wore a man's clothes. It had on a white and blue checked shirt and long pants. Its arms were raised over its head, almost touching the top of the cab. It looked like a hairy man or a hairy animal in man's clothing, but it didn't look like an ape or anything like that. Its eyes were yellow and its mouth was open."

The father described as a fearless man who had served two tours in Vietnam, turned completely white, the blood drained from his face. The hair on his neck and arms stood straight up, like a cat under duress, and noticeable goose bumps erupted from his skin. Although time seemed frozen during this bizarre interlude, the truck continued on its way, and the family was soon miles down the highway.

A few days later, at their home in Flagstaff, the family awoke to the sounds of loud drumming. As they peered out their windows, they saw the dark forms of three "men" outside their fence. The shadowy beings tried to climb the fence to enter the yard but seemed inexplicably unable to cross onto the property. Frustrated by their failed entry, the men began to chant in the darkness as the terrified family huddled inside the house.

The story leaves several questions unanswered. If the beings were skinwalkers, and if skinwalkers can assume animal form or even fly, it isn't clear why they couldn't scale a fence. It is also not known whether the family called the police about the attempted intrusion by strangers.

The daughter, Frances, says she contacted a friend, a Navajo woman who is knowledgeable about witchcraft. The woman visited the home, inspected the grounds, and offered her opinion that the intruders had been skinwalkers who were drawn by the family's "power" and that they had intended to take that power by whatever means necessary. She surmised that the intrusion failed because something was protecting the family, while admitting that it was all highly unusual since skinwalkers rarely bother non-Indians. The Navajo woman performed a blessing ceremony at the home. Whether the ceremony had any legitimacy or not, the family felt better for it and has had no similar experiences in the ensuing years.

Part of this article consists of modified text from Wikipedia, and the article is therefore licensed under GFDL.
Retrieved from "https://www.monstropedia.org/index.php?title=Skin-walker&oldid=15567"
Categories: