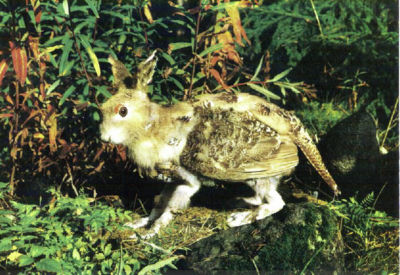 The Skvader is a Swedish fictional creature that was assembled in 1918 by the taxidermist Rudolf Granberg and is now displayed at the museum at Norra Berget in Sundsvall.

The name is a combination of two words, and this is path suggested by Svenska Akademiens Ordbok: The prefix skva- from "skva-ttra"; (quack or chirp), and the suffix -der from "tjä-der" (wood grouse). It was later jokingly given the Latin name Tetrao lepus pseudo-hybridus rarissimus L. The term "skvader" is nowadays used colloquially in Swedish to mean "a bad compromise" or "a combination of contradicting elements".

The Skvader has the forequarters and hindlegs of a hare (Lepus), and the back, wings and tail of a female wood grouse (Tetrao urogallus).

The skvader originates from a tall tale hunting story told by a man named Håkan Dahlmark during a dinner at a restaurant in Sundsvall in the beginning of the 20th century. To the amusement of the other guests, Dahlmark claimed that he in 1874 had shot such an animal during a hunt north of Sundsvall. On his birthday in 1907, his housekeeper jokingly presented him with a painting of the animal, made by her nephew and shortly before his death in 1912, Dahlberg donated the painting to a local museum. During an exhibition in Örnsköldsvik in 1916 the manager of the museum became acquainted with the taxidermist Rudolf Granberg. He then mentioned the hunting story and the painting and asked Granberg if he could re-construct the animal. In 1918 Granberg had completed the skvader and it has since then been a very popular exhibition item at the museum, which also has the painting on display.

The skvader has since then often been seen as an unofficial symbol for Sundsvall and when the province Medelpad was to be given a provincial animal (in addition to the provincial flower) in 1987, many locals voted for the skvader. The final choice was a kind of compromise, the mountain hare, which is the front-end of the skvader.