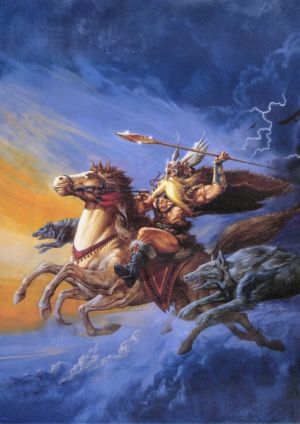 In Norse mythology, Sleipnir is Odin's magical eight-legged steed, and the greatest of all horses.

Sleipnir means smooth or gliding, and is related to the English word "slippery". The name of Sleipnir is sometimes anglicized as "Sleipner", especially in old popular works. This form of the name is also the one most commonly used in Scandinavia.

Sleipnir is a horse-like creature which conveys Odin between the realms of spirit and matter and is symbolic of Time. Sleipnir can gallop over land, sea, or through the air. Sleipnir has eight legs, representing eight directions and eight dimensions similar to the eight spokes solar wheel, which relate to an earlier form of Odin as a sun-god. There is some evidence that Odin himself was at one time anthropomorphized as a horse; Sleipnir's ability to travel instantaneously associates him with sunlight.

Sleipnir is the child of the shape-shifting god Loki (in female form) and a giant stallion, Svadilfari. In Norse mythological tales, occult, Sleipnir is the offspring of the God Loki and the horse of the Giants, Svaldifari. Sleipnir can be compared to the otherworldly horses of Celtic gods such as Manannan Mac Lir and In Dagda.

The Birth of Sleipnir

According to Norse mythology, the wall that enclosed Asgard was destroyed during a war between the Vanir and the Aesir, leaving the gods vulnerable to an attack by the giants. Thor, the Giant-Slayer, was away from Asgard slaying giants in the north, when a hrimthurs disguised as a human stonemason appeared, offering to rebuild the wall all around Asgard in exchange for the sun, the moon, and fair Freyja. The gods agreed, thinking that it would be good, since part of the wall was crumbling, and also believing the giant would never be able to complete it in the agreed upon six month time frame. The giant asked one thing: the use of his gray stallion, Svadilfari (literally, "slave", or possibly "ill-fated").

Then, as Svadilfari was dragging the final brick to complete the wall back to Asgard, Loki transformed into a beautiful white mare, and led the stallion away, angering the giant. When the giant began tearing down the wall, Thor appeared and smashed the giant on the head with his hammer, Mjollnir.

Loki later gave birth to Sleipnir, the eight-legged steed of Odin, the offspring of the gray stallion Svadilfari and Loki when "he" was the beautiful white mare. 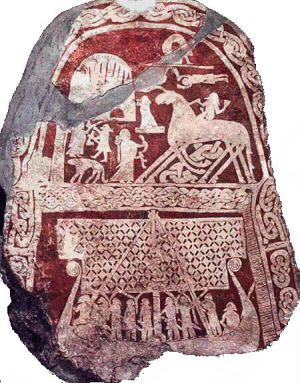 Sleipnir is shown with a serpent twining between his legs, with Odin on his back, wearing a sword and holding a drinking horn. A Valkyrie approaches to offer mead.

According to the Prose Edda, Loki returned to Asgard and gave the eight-legged gray colt to Odin, telling him that the horse was the swiftest on earth, and could bear Odin over sea, through the air, and to and from the land of the dead. According to Sigrdrífumál in the Poetic Edda, Sleipnir has runes carved on his teeth.