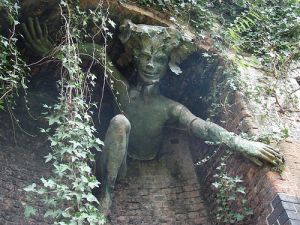 'Not long since, a tinner of Lelant dreamt, three nights following, that a crock of gold Divas buried in a particular spot between large rocks within the castle, on Trecroben hill. The next clear moonlight night he dug up the ground of which he had dreamt. After working two or three hours he came to a flat stone which sounded hollow; whilst digging round its edges, the weather became suddenly dark, the wind roared around the carns, and looking up, when he had made a place for his hands to lift it, he saw hundreds of ugly spriggans coming out from amidst the rocks gathering around and approaching him. The man dropped his pick, ran down the hill and home as fast as could lay foot to ground; he took to his bed and was unable leave it for weeks.

When he next visited the castle he found the pit all filled with the turf replaced; and he nevermore dug for the treasure.'From William Bottrell's Traditions and hearthside stories of West Cornwall.