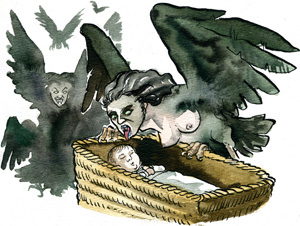 Strix, also known as striges, are witches who transformed into screech owls at night and, in this form, preyed upon infants by drinking their blood and sometimes eating their internal organs as well.

The word has a Greek origin and means owl, with which bird it is usually identified. The Latin feminine plural form of stryx is striges. In the modern Italian language, striga has become a general word for witch.

The association of Striges with screech owls gave rise to the term owl-blasted, meaning wasting-away spell cast upon a man. The term was popular in Britain through the 16th century.

The appearance and sound of the screech owl influenced Roman ideas of the blood-drinking strix. The strix or striga (pl. striges; occasionally corrupted to stirge) was an Ancient Roman legendary creature, usually described as a nocturnal bird of ill omen that fed on human flesh and blood, like a vampire. Unlike later vampires, it was not a revenant.

A strix is depicted as a blood-drinking bird, with huge talons, misshapen heads, breasts full of poisonous milk.

How to ward off a Strix

Crane in Ovide’s sprinkles the door way with "drugged" water and places a branch of hawthorn in the window. In much later European lore, hawthorn is often considered as effective as garlic for the purpose of warding away or confining the undead vampires and the best material for stakes to pound through their hearts. 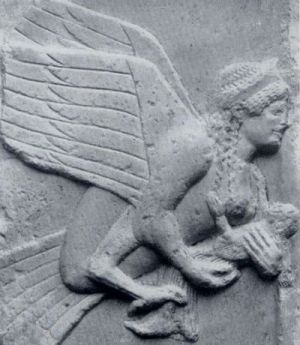 The concept of the strix was nonetheless vague. The scientific Pliny, in his Natural History confesses little knowledge of them; he knows that their name was once used as a curse, but beyond that he can only aver that the tales of them nursing their young must be false, since no bird except the bat (at the time commonly and wrongly classified as a bird, with the exception of Aristotle who considered the bat as halfway between bird and land animal) suckled its children.

Roman poet Ovid, by the way, suggested three possible theories as to the origin of Striges. They were either:

The Synod of Rome, dated 743, outlawed offerings to Striges. In 744 “A list of Superstitions” drawn at the Council of Leptinnes renounced “all the works of the Demon and all the evil beings that are like them”. Many laws were then passed forbidding belief in pagan spirits, punished sometimes (as in Saxony, back in 789) with execution.

In the Middle Ages striges were said to be servants of Satan and his demons.

Part of this article consists of modified text from Wikipedia, and the article is therefore licensed under GFDL.
Retrieved from "https://www.monstropedia.org/index.php?title=Strix&oldid=16763"
Categories: