Su, or Succarath is a ferocious beast that lives in the cold, wild country at the tip of South America (Patagonia). 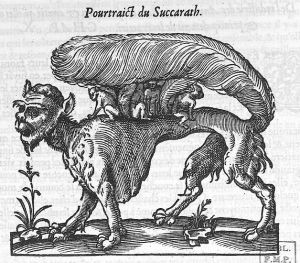 Half tiger and half wolf, it has the head of a beautiful but malicious woman. Its tail looks like a large, flat, green palm leaf.

It lived near the banks of rivers and, if it were pursued, took its young on its back, covered them with its tail, and fled. If it is cornered by a hunter, the mother Su will kill her young rather than let them live in captivity, which is why you will never see one in a zoo.

Most likely, the creature has been invented by Thevet but later appeared in Edward Topsell’s The Historie of Four-Footed Beastes (1607).

The Su, i. e. water, becaufe living by rivers LI

Some call it Succarath. it hath a fierce Lions
looke, yet is bearded from the eare like a man,
1hort-haired, the belly Itrutting out,lank flank-
ed , the tail large and long , as a fquirrclls.
Tliegiantlike men there,the climate being not

very hote, wear the skins, for which, wlien

hunted they lay their young on their back,and
cover them with their tail, and fo run away,but
are taken, vvhelps, and all in pits covered with
boughs. Being faft in, for rage, or generouf-
nefIe they kill their whelps, and cry hideoully
to fright the hunters; they flioot him dead with
arrows, and flea him. Some fain that they in
fondneffe carry their young to medows, and
there thev dreffe onch otherwithlicrndsind of
faire fweet flowers.