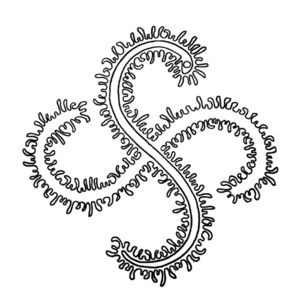 In Basque mythology, Sugaar (other names: Sugar, Sugoi, Maju) is the male half of a deity associated with storms and thunder.

The name Sugaar or Sugar seems to derive of the addition of the words suge (serpent) and ar (male), meaning therefore male serpent. Nevertheless, some have pointed to the possibility that it could be another agglutination which is hidden in the word: su (fire) + gar (flame), meaning in this case flame of fire.

Sugoi, another name of the same deity, has the same dual interpretation: either suge + o[h]i (former, old serpent) or su + goi (high fire). There's no likely etymology for the third name of this god, Maju. The reference to a masculine phallic power could be implied in it,if it has reference to the traditional 'Maypole' of fertility celebrations,called in spanish the "Mayu"(Maypole).Maya and Mayo( "Macho"?) being her spring time consort.

Sugaar is normally described as dragon or serpent. The basic theme of his existence is to periodically join with Mari in the mountains to generate the storms.

Part of this article consists of modified text from Wikipedia, and the article is therefore licensed under GFDL.
Retrieved from "https://www.monstropedia.org/index.php?title=Sugaar&oldid=11490"
Categories: