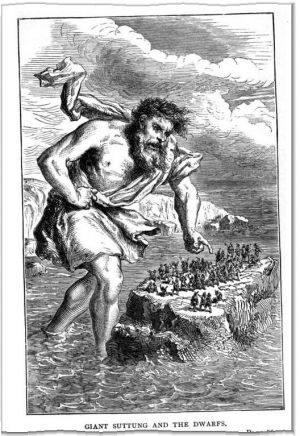 In Norse mythology, Suttung is a giant, son of Gilling and brother of Baugi. Together, they guard the precious mead of poetry they obtained from the two dwarves, Fjalar and Galar, who had murdered they parents.

Suttung was enraged after the murder of his parents. He threatened Fjalar and Galar until they offered him something suitable for compensation. This was the mead of inspiration, which Suttung gave his daughter Gunnlod to guard in a cave.