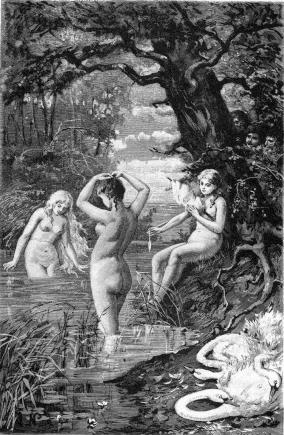 In the Völundarkviða, Wayland Smith and his brothers marry valkyries who dress in swan skins. They turn out to be hard to keep.

The swan maidens were Welsh fees who could transform themselves into swans by wearing a cloak of feathers.

It was said that if this cloak was acquired by a mortal, he could command them and force them to remain in human form. Many marriages resulted from men stealing the magical garments of the swan maidens, in much the same way as one could command a selkie (one of the seal folk of Scottish and Irish legend) if one gained her skin.