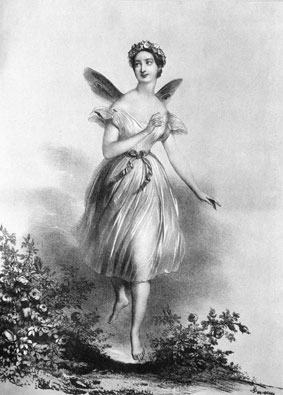 Sylph is a faux-mythological creature in the Western tradition. "Sylph" has passed into general language as a term for minor spirits, elementals, or faeries of the air. Fantasy authors will sometimes employ sylphs in their fiction.

In current usage, the term is applied to a feminine spirit or fairy, and is often used in a figurative sense of a graceful, slender girl or young woman.

New Latin sylpha, perhaps blend of Latin sylvestris, of the forest (from silva, sylva, forest) and Latin nympha, nymph; Littre, however, takes the word to be Old Celtic, and meaning "genius," and states that it occurs in such forms as sulfa, sylfi, &c., in inscriptions, or latinized as sulevae or suleviae.

The term originates in Paracelsus, who describes sylphs as invisible beings of the air, his elementals of air. There is no substantial myth associated with them. As alchemy in the West derived from Paracelsus, alchemists and related movements, such as Rosicrucianism, continued to speak of sylphs in their hermetic literature.

Because of their association with the ballet “La Sylphide” as well as a confusion with other "airy spirits" (e.g. in William Shakespeare's A Midsummer Night's Dream), sylphs have become often identified with fairies and the medieval legends of fairyland.

The first mainstream western discussion of sylphs comes with Alexander Pope. In Rape of the Lock, Pope satirizes French Rosicrucian and alchemical writings when he invents a theory to explain the sylph. In a parody of heroic poetry and the "dark" and "mysterious" literature of pseudo-science, and in particular the sometimes esoterically Classical heroic poetry of the 18th century in England and France, Pope pretends to have a new alchemy, where the sylph is the mystically, chemically condensed humor of peevish women.

In Pope's poem, women who are full of spleen and vanity turn into sylphs when they die because their spirits are too full of dark vapors to ascend to the skies. Belinda, the heroine of Pope's poem, is attended by a small army of sylphs, who foster her vanity and guard her beauty.

This is a parody of Paracelsus, inasmuch as Pope imitates the earnest pseudo-science of alchemy to explain the seriousness with which vain women approach the dressing room. In a slight parody of the divine battle in John Milton's Paradise Lost, when the Baron of the poem attempts to cut a lock of Belinda's hair, the sylphs interpose their airy bodies between the blades of the scissors (to no effect whatever).

The chief sylph in "The Rape of the Lock" has the same name as Prospero's servant in Shakespeare's The Tempest: Ariel.

synopsis: Act I: La Sylphide takes place in Scotland. James is sitting in an armchair at the fireside at the dawn of the day of his marriage to Effie. Near him a winged spirit, a sylphide, (sylph), appears, gazes at him with love, and wakes him with a kiss. As James wakes up, the sylph runs away, dancing. Effie, her mother, some neighbours, Gurn, (Effie's disappointed suitor), and Madge, (an old witch that James had sent away), arrive. Madge prophesies that Effie is not loved by her betrothed, (James), and will marry Gurn. When he is left alone James sees the sylph again. This time she professes her love for him and invites him to follow her. Gurn has witnessed this and runs to tell Effie, so that she may see James' infidelity. The sylph is in the big chair, but James covers her with his cloak, and when Gurn whips it away the chair appears to be empty. During the party the sylph moves among the dancers, visible only to James. Finally, she takes the wedding ring intended for Effie from his hand and rushes into the forest, with James in pursuit, leaving Effie in tears. Gurn leads the guests in search of James. Act II: The witch Madge is in a dark cave conjuring spells and surrounded by demons. She dips a filmy scarf into the cauldron. Now, in a dense forest, James enters followed by the sylph, with whom he is now in love, even though she continually evades him. Meanwhile Gurn and the others have returned from their search after failing to find James. Madge appears and gives James the scarf "with which he can hold his elusive love." After a couple of tries he succeeds in tricking the sylph and encircling her in the scarf. Immediately her wings fall off, as Madge has cast a spell on the scarf, and the sylph dies. Overcome, James falls to the ground, and in the distance we hear the sounds of the marriage feast of Gurn and Effie, while the witch gloats over her revenge. notes: This ballet is set in Scotland, a land that was considered remote and exotic at the time, and was created, for Marie Taglioni to dance the role of the sylph, by her father. However, the version you will probably see today is not the original Taglioni version, it is the newer Bournonville version.