Tálos was a giant creature made of bronze that some writers say was the last survivor from the Bronze Age. 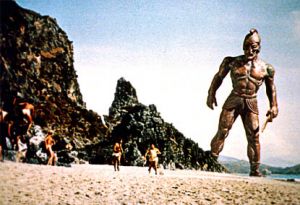 In Greek mythology, he was a bronze automaton whom Zeus gave to Europa. In one telling he was forged by Hephaestus who gave the robot to King Mino and the Cyclopes. Also, some say he was a bull, not a robot.

It was a very strong creature that had but one weak spot on his body, the vein in his ankle. His bronze body was kept alive by an ichor contained in that single vein. When the nail is removed, Talos's ichor flows out, exsanguinating and killing him. Talos is said to have heated himself red-hot and clasped strangers in his embrace as soon as the argonauts landed on the island.

Hephaestus' robot guarded Crete by walking around the perimeter of the island three times a day and throwing rocks and other debris at ships so that they would not land on the island.

According to Apollodorus, Talos was slain either when Medea the sorceress drove him mad with drugs, deceived him that she would make him immortal by removing the nail, or was killed by Poeas's arrow. In Argonautica, Medea hypnotizes him from the Argo, driving him mad so that he dislodges the nail and dies.

Talos had one vein which went from his neck to his ankle, bound shut by only one bronze nail. The Argo, containing Jason and the Argonauts, approached Crete after obtaining the Golden Fleece. As guardian of the island, Talos kept the Argo at bay by hurling great boulders at it. Medea convinced Talos that she would give him a secret potion that would make him immortal if he would let her stop on the island. Talos agreed and drank the potion and it made him fall asleep. Medea went to him in his sleep and pulled the plug in his ankle, whereupon Talos bled to death (Argonautica 4.1638). Other stories say that when Medea tried to land on the island, Talos scraped his ankle on a rock while trying to fight her off and bled to death.

According to an entirely different version, Talos was killed by an Argonaut Poeas, who shot him in the ankle with an arrow (Apollodorus 1.140). The story is somewhat reminiscent of the story regarding the heel of Achilles.

According to Apollodorus and Argonautica he may have been a member of the Ages of Bronze Generation who had survived to the age of the demigods. Europa took him to Crete and he stayed there, circling the island's shore three times daily while guarding it. He threw rocks at any approaching ship.

Part of this article consists of modified text from Wikipedia, and the article is therefore licensed under GFDL.
Retrieved from "https://www.monstropedia.org/index.php?title=Talos&oldid=6140"
Categories: