In southern France, near the town of Nerluc (“Black Lake”), on the banks of the Rhone River, just north of its ancient swampy delta, between Avignon and Arles, lived a large beast called the Tarasque, a scaley, four-footed beast with a massive carapace on its back, bristling with spikes, ending in a pointed, arrowhead tail (Shuker, Dragons, p.100-103). The Nerlucians tried to kill the Tarasque with a spear and stones hurled from twelve catapults, but failed to make an impact upon it, though the thuds cracked crockery within the city walls. 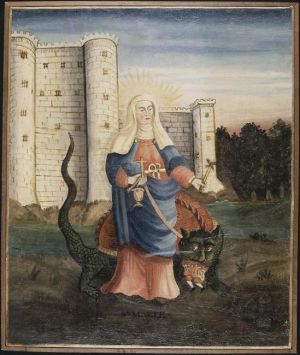 The Tarasque’s body was most like that of an ox borne upon short bear-like legs with enormous claws. His turtle-like shields were covered with curved spikes, while the rest of his reptilian torso was armored with closely overlapping scales. They report the tail as long and curved like that of a scorpion; and the head as shaped like a lion’s (which rules out a crocodile), but with a horse's ears and an expression like that of a bitter old man (Felice Holman & Nanine Valen, The Drac: French Tales of Dragons and Demons, Scribner's Sons, New York: 1975). According to Jacques De Voragine in "The Golden Legend" ( about 1255 , it was "a dragon, haif animal, halffish, wider than an ox, longer than a horse, with teeth like swords, the size of horns, which bore a shield on either side”.

Provençal Christian tradition recounts that Martha, Marie-Magdeiene, Lazarus and other saints (as well as fourteen bishops) were thrown into an open boat with no sails or oars in 50 Palestine, they were said to have landed in the Camargue around 48 AD. Martha went up the Rhône and reached Tarascon where a dreadful monster lived in a den beside the river the Tarasque. On being implored by the people of Tarascon, Saint Martha captured the monster and handed it over to them, they tore it to pieces and then were converted to the new religion. Saint Martha settled in Tarascon where she died in 68 AD. The relics of Saint Martha were hidden to avoid the destructive rage of the Saracens. In 1199, a beautiful Romanesque church was consecrated in her name, the very fine porch still remains. Many fervent pilgrims came to pray before the tomb of the Saint and it was thus quite naturally that monasteries, the homes of prayers and meditation, grew up in this area.

The beast sounds remarkably like the “Ankylosauria, heavily armored, rather turtle-like quadropeds (Vertebrate Paleontology, p.245).” The body of these big, “reptilian tanks . . . was broad and flattened, the proportions not unlike those of a ‘horned toad.’ The entire back was covered by a tough mosaic of larger and smaller bony plates which formed a seemingly efficient carapace. The front legs, which projected somewhat at the sides, were afforded protection by long spines extending outward from the shoulder region; and the tail was encased in rings of bone and sometimes armed with long, bony spikes (Ibid, p.253).”

Another theory states that the beast was a crocodile. The animal must have come up the Rhône after the wreck of a ship carrying it to some neighboring amphitheatre and the marshy Rhône delta offered it a warm and sure haven. This would also explain why the monster was so badly represented, it was foreign to the area and, of course, had only been glimpsed from a distance.