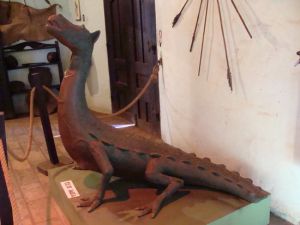 Teju Jagua is the name of a monstrous creature from Guaraní mythology.

Ao Ao is the first of the seven cursed sons of Tau and Kerana. He is considered the lord of the caves and protector of fruit. He is also mentioned as a brilliant protector of buried treasure.

His appearance was the most horrid of all the seven brothers as he is described as a huge lizard with seven dog-heads and eyes that shoot out fire. However his seven dog-heads make any movement difficult. Some versions of the story say Teju Jagua has only one giant dog-head but all agree that the monster has a limited ability to move around. It is also said that his skin became shiny after rolling around in the gold and precious stones of Itapé.

Teju Jagua ferocity was tempered by choice of Tupã and he was considered calm and harmless but still feared for his fiery gaze. Teju Jagua feeds on fruit and his brother Yasy Yateré gave him honey, his favorite food.