Thanatos was a son of Nyx (Night) and Erebus and twin of Hypnos (Sleep). According to mythology, Thanatos could occasionally be outwitted, a feat that Sisyphus twice accomplished. When it came time for Sisyphus to die, he succeeded in chaining Thanatos up with his own shackles, thereby prohibiting the death of any mortal. Eventually Ares released Thanatos and handed Sisyphus over to him, though Sisyphus would trick Thanatos again by convincing Zeus to allow him to return to his wife.

In early mythological accounts, Thanatos was perceived as a powerful figure armed with a sword, with a shaggy beard and a fierce face. His coming was marked by pain and grief. In later eras, as the transition from life to death in Elysium became a more attractive option, Thanatos came to be seen as a beautiful young man. Many Roman sarcophagi depict him as a winged boy, much like Cupid.

Thanatos is sometimes depicted as a young man carrying a butterfly, wreath or inverted torch in his hands. He has also been depicted as having two wings and a sword attached to his belt. 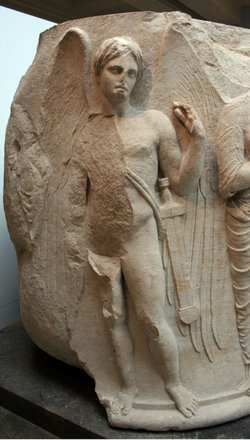 Thanatos is a common name for characters in various fictional works, including video games, TV shows, animé and comic books. Thanatos is referred to:

Part of this article consists of modified text from Wikipedia, and the article is therefore licensed under GFDL.
Retrieved from "https://www.monstropedia.org/index.php?title=Thanatos&oldid=12447"
Categories: