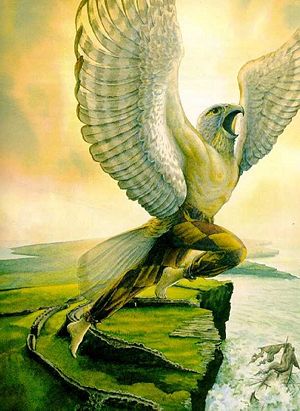 The thunderbird is a large bird-like mythological creature common to Indigenous peoples of North America, either a singular entity or a species. Because of the numerous sightings that have occurred for centuries throughout North America, the creature is also classified as a cryptid.

The thunderbird's name comes from that common supposition that the beating of its enormous wings causes thunder and stirs the wind. The Lakota name for the Thunderbird is Waki´ya, a word formed from kiya, meaning winged, and wakha, sacred. The Kwakwaka'wakw (Kwakiutl) called him Jojo and the Nuu-chah-nulth (Nootka) called him Kw-Uhnx-Wa. The Ojibwa word for a thunderbird that is closely associated with thunder is animikii, while large thunderous birds are binesi. The Comanche tribe call it ba'a' and the Potawatomi use the name chequah; Illini, were once terrorized by a large bird they called the Piasa.

The thunderbird is described as having a 15 to 20 feet wingspan and four to eight feet height when standing on the ground. In masks, it is depicted as many-colored, with two curling horns, and sometimes with teeth within its beak. It is intelligent, powerful, and wrathful. All agree that one should go out of one's way to keep from getting thunderbirds angry.

According to the Quillayute Indians

Thunderbird is a very large bird, with feathers as long as a canoe paddle. When he flaps his wings, he makes thunder and the great winds. When he opens and shuts his eyes, he makes lightning. In stormy weather, he flies through the skies, flapping his wings and opening and closing his eyes. Thunderbird's home is a cave in the Olympic Mountains, and he wants no one to come near it. If hunters get close enough so he can smell them, he makes thunder noise, and he rolls ice out of his cave. The ice rolls down the mountainside, and when it reaches a rocky place, it breaks into many pieces. The pieces rattle as they roll farther down into the valley. All the hunters are so afraid of Thunderbird and his noise and rolling ice that they never stay long near his home. No one ever sleeps near his cave. Thunderbird keeps his food in a dark hole at the edge of a big field of ice and snow. His food is the whale. Thunderbird flies out of the ocean, catches a whale and hurries back to the mountains to eat it. One time Whale fought Thunderbird so hard that during the battle, trees were torn up by their roots. To this day there are no trees in Beaver Prairie because of the fight Whale and Thunderbird had that day.

Though the Thunderbird myth varied from region to region and tribe to tribe, the Thunderbird was, in the eyes of the ancient Native Americans, a magical animal that was sent by their gods to protect them from the powers of evil.

Native Americans believed that these giant birds brought thunder and rain with them as they flew through the air by flapping their wings, and lightning by closing their eyes.

Clouds are pulled together by its wingbeats, the sound of thunder is its wings clapping, sheet lightning is the light flashing from its eyes when it blinks, and individual lightning bolts are glowing snakes that it carries with it.

Other native Indians believed that thunderbirds belonged to a special tribe whose members were able to shapeshift to human form by tilting back their beak as if it were only a mask, and by removing their feathers as if it were a feather-covered blanket.

There are stories of thunderbirds in human form marrying into human families; some families may trace their lineage to such an event. Families of thunderbirds who kept to themselves but wore human form were said to have lived along the northern tip of Vancouver Island. The story goes that other tribes soon forgot the nature of one of these thunderbird families, and when one tribe tried to take them as slaves the thunderbirds put on their feather blankets and transformed to take vengeance upon their foolish captors. 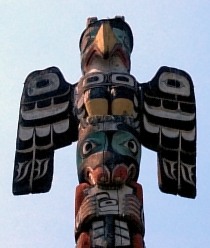 Depiction of a Thunderbird on a totem pole

Another Thunderbird story can be found in the myths and legends of the Quillayute Indians of the Pacific Northwest. In this story, disaster had struck the Quillayute - rain and hail had fallen for many days, destroying all of the edible plants and making it impossible to fish. Many of their people had been killed by the hail, which was followed by sleet and snow. Out of food, the Quillayute were desperate, and the Great Chief was forced to call upon the Great Spirit for help. The Great Spirit answered and sending them his messenger, the Thunderbird.

The people waited. No one spoke. There was nothing but silence and darkness. Suddenly, there came a great noise, and flashes of lightning cut the darkness. A deep whirring sound, like giant wings beating, came from the place of the setting sun. All of the people turned to gaze toward the sky above the ocean as a huge, bird-shaped creature flew toward them. This bird was larger than any they had ever seen. Its wings, from tip to tip, were twice as long as a war canoe. It had a huge, curving beak, and its eyes glowed like fire. The people saw that its great claws held a living, giant whale. In silence, they watched while Thunderbird - for so the bird was named by everyone - carefully lowered the whale to the ground before them. Thunderbird then flew high in the sky, and went back to the thunder and lightning it had come from. Perhaps it flew back to its perch in the hunting grounds of the Great Spirit. Thunderbird and Whale saved the Quillayute from dying. The people knew that the Great Spirit had heard their prayer. Even today they never forget that visit from Thunderbird, never forget that it ended long days of hunger and death. For on the prairie near their village are big, round stones that the grandfathers say are the hardened hailstones of that storm long ago.

Every snow, Thunderbird [Suck-z'-cum] of the snow-land came to devour the fairest of the virgins among the villages. It was the custom that the maiden go meet the monster, to be eaten for the sake of her tribe. Thunderbird was satisfied to leave the people unmolested so long as he was given this yearly sacrifice; but it must be at his first appearance from the snow-land, at his first rolling among the clouds. No one had ever been able to scare Thunderbird, could not frighten him from his human feast. With the spring there was wailing for the victim.

At last Garter Snake [Sku-qua-wel'hau] thought that he would try to meet Thunderbird. The maiden chosen to perish was one that Garter Snake loved. When she left the village crying, going to her terrible death, Garter Snake put on his best warbonnet and followed her. The maiden saw him. She begged him to return lest he also be killed.

Garter Snake said, "No! I am going to die with you."

She said to Garter Snake, "Go back to our people! You cannot stand before Thunderbird! I alone will die!"

But Garter Snake would not turn back. Soon he heard the flapping of great wings. It was Thunderbird coming. Garter Snake's legs shook with fear. He wanted to run away, but his pride, his love for the girl, made him brave. He met Thunderbird without revealing that he was afraid.

Garter Snake answered, "I fear nothing! Nothing can hurt me. If you wish to fight, I will show you how big a fire I can spit."

These words Thunderbird believed, for none of the tribes had dared to meet him before. Only the timid maidens who came crying to their death had ever faced him. Thunderbird spit a bigger fire, thinking to scare Garter Snake. But Garter Snake spit a great fire streaming in the face of Thunderbird. This soon scared Thunderbird, who turned towards his snow-country home. Garter Snake followed him, spitting fire as he chased the big Thunderbird.

Garter Snake said to him after driving him home, "From this day you will never come back to our land to devour the people. You will only roam the skies, only make rumblings and crashing amid the storm gathering."

Since that time Thunderbird has kept away from the people. He was ashamed because Garter Snake had driven him away with spitting fire. He never came back to destroy the tribes of the warm countries. He could only fly through the upper space, only clash his broad wings among the clouds, spitting fire from his great mouth.

Garter Snake went back to his people with the maiden whom he had saved. For his bravery in protecting the tribes from Thunderbird, for scaring away the mighty air-monster with his pretended power, they gave Garter Snake a pretty green blanket with stripes. This garb Garter Snake wears to this day.

The Indian name for Garter Snake can be transcribed as Sku-qua-wel'hau. Modified to Chewelah, the name is give to the town in Stevens County, and to the creek that runs through it. The location for both was apparently known for garter snakes, though some sources say, small water snakes. Others say that from the surrounding mountains, the small brook wound around like a garter snake. collected by Mourning Dove, in the early part of the Twentieth Century. First published in 1933, the myth was reprinted in an expanded edition, as Tales of the Okanogan, edited by Donald M. Hines, Ye Galleon Press, 1976.

If the thunderbird really exist, it would be the largest flying creature. By comparison, the largest wingspan known on a living bird is that of the wandering albatross (diomedea exulans) with a wingspan to 12 feet, and while not a predatory bird, it still boasts an impressive span.

The Andean condor (Vultur gryphus) and the California condor (Gymnogyps californianus) are among the largest predatory birds in the world, with the Andean condor reaching a wingspan of 10.5 feet and the California condor (the largest North American predatory bird) reaches a wingspan of up to 10 feet. the Bald Eagle, which is very common on the Northwest Coast and can also grow to immense size. 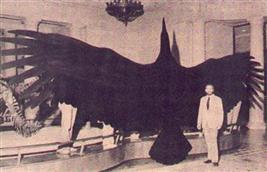 Angelo P. Capparella, an ornithologist at Illinois State University, argues that the existence of such undiscovered large birds is highly unlikely, at least in North America. There is not enough food, Capparella says, in many areas where abnormally large birds are reported. Perhaps more important, according to Capparella, is the lack of sightings by "the legions of competent birdwatchers ... scanning the skies of the U.S. and Canada" who sometimes make "surprising observations" with cameras at the ready (see for example 20th-century sightings of the Eskimo Curlew). Were there breeding populations of large, unknown birds, Capparella contends they could not remain unknown very long.

Some skeptics have claimed such a large bird could never have flown, but several flying creatures with huge wingspans are indeed known.