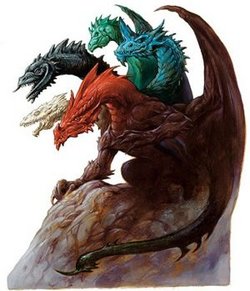 Tiamat as depicted in the Deities & Demigods reference book

In the Dungeons & Dragons role-playing game, Tiamat is a powerful draconic goddess, usually depicted as a European dragon with multiple heads. The name is taken from a goddess of the same name from ancient Mesopotamian mythology which is substantially different (and did not have multiple heads.

Tiamat is a queen of evil dragons and a member of the default pantheon of D&D gods.

Like most other draconic deities, she is the offspring of the dragon creator deity Io. She is the eternal rival of her brother Bahamut, the ruler of the good metallic dragons. She dwells in Avernus, the first layer of the Outer Plane of Baator (also known as the Nine Hells). The first edition of Advanced Dungeons & Dragons named her as the ruler of Avernus; later editions reserved the rulership of the layers of Baator for powerful baatezu (devils).

In many campaign settings, the draconic pantheon of gods consists of the leader Io, as well as Aasterinian, Bahamut, Chronepsis, Faluzure, and Tiamat. Other draconic gods may be present in different campaign settings.

In most Dungeons & Dragons campaign settings, Tiamat is the five-headed queen of the evil chromatic dragons. She has one head for each primary color of chromatic dragon (black, blue, green, red, white), and each head has the powers of a member of the respective race of dragonkind.

Tiamat was also one of the first deities to have Aspects, or lesser avatars. These Aspects may appear as powerful versions of her chromatic children or as versions of her own five-headed form. One such multiheaded Aspect was released in the Dungeons & Dragons Miniatures expansion set entitled War of the Dragon Queen (released in July 2006, this expansion is believed to be named after Tiamat as well). A smaller Aspect of Tiamat appears in the Dungeons & Dragons Miniatures Handbook.

It should be noted that in Dungeons & Dragons, despite the apparent notable differences between the mythological Tiamat and even her various campaign setting incarnations, it was the original intention of Gary Gygax, Ed Greenwood and others, as well as the basis for some of the ideas for the Planescape setting, that the various Tiamat incarnations, as well as other deities with real-world equivalents, were ultimately aspects of a single entity that happened to be active on more than one plane of existence.

In the Dragonlance campaign setting, Tiamat's counterpart is Takhisis, the Dark Queen. Though some believe them to be the same being, there are enough differences on Planescape publications to classify the two as separate entities.

In the Forgotten Realms campaign setting, all of the above holds true, except where contradicted by Realms canon. Tiamat is one of the few surviving gods of the Untheric pantheon (based on the Sumerian mythology), having battled Marduk in ages past, and also a member of the draconic pantheon, daughter of Io, the slayer of Gilgeam the God-king of Unther, Nemesis of the Gods.

Tiamat in other games and media

Various monsters called Tiamat, patterned after the Dungeons & Dragons character, have appeared in other fantasy games, particularly computer and console role-playing games. A five-headed dragon, intended by Takhisis herself to become her physical incarnation, has to be fought near the end of the game Dark Queen of Krynn. Additionally, Takhisis is the final boss of the version of the video game Dragon Strike for the Nintendo Entertainment System, appearing in her traditional Dungeons & Dragons form as a multicoloured, multiheaded dragon.

In the Dungeons & Dragons TV series, Tiamat is the arch enemy of the "main" villain, Venger.

Tiamat has appeared in many Final Fantasy games, usually taking the shape of a multi-headed dragon. In The Final Fantasy Legend, Tiamat is the most powerful monster in the 'dragon' category and available as a playable character; a monster in your party may transform into Tiamat by eating the meat from certain boss characters. In Final Fantasy Tactics, Tiamat is a powerful Monster class that can be tamed by the player. Every other incarnation of Tiamat has been a major boss.

In Ogre Battle: The March of the Black Queen, Tiamat is the promoted/'evolved form' of the Black Dragon (as with Pokémon, such promotion may be triggered when a certain level of experience is reached). Due to the nature of the game, Tiamat may thus be non-unique and appear as both a playable character and an enemy; even simultaneously.

As well in Final Fantasy VIII, Tiamat is a powerful evil dragon under the control of the final boss Ultimecia

In Diablo 2 Tiamat's Rebuke is unique a Dragon shield which has Fire, Ice, and Lightning properties.