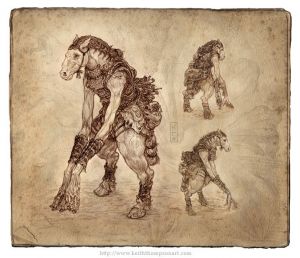 Keith Thompson's rendition of a tikbalang.

Tikbalang (also written Tigbalang, Tigbalan, or Tikbalan) is a creature of Philippine folklore said to lurk in the mountains and forests of the Philippines.

The tikbalang is generally described as a tall, bony humanoid creature with disproportionately long limbs, to the point that its knees reach above its head, hiding its face, when it squats down. It has the head and sometimes feet of an animal, most commonly a horse.

Since horses only arrived in the Philippine archipelago during the Spanish colonization (thus, the borrowed term 'kabayo'), there is a theory that the image of a half-horse, half-man creature was propagated by the conquistadors to keep the natives afraid of the night.

According to traditional folklore, the tikbalang can also transform itself into human form. It may assume the form of someone a victim may be acquainted with, such as a close relative, and imitate their exact voice and mannerisms. At this point, the tikbalang is said to ask the victim to follow it into the woods. The traveler, believing the creature to be someone he knows, will do so willingly and end up getting even more lost, sometimes never to be seen again.

By one account a tikbalang has a mane of sharp spines, with the three thickest of these being of particular importance. A person who obtains one of these spines can use them as an anting-anting (talisman) in order to keep the tikbalang as his servant. The tikbalang must first be subdued, however, by leaping onto it and tying it with a specially-prepared cord. The would-be-tamer must then hang on while the creature flies through the air, fighting madly to dislodge its unwelcome rider, until it is exhausted and acknowledges its defeat.

Tikbalangs are said to scare travelers and lead them astray. Tikbalangs play tricks on travelers such that they keep on returning to an arbitrary path no matter how far he goes or where he turns.

Supposedly this is counteracted by wearing one's shirt inside out. Another countermeasure is to ask permission out loud to pass by or, not to produce too much noise while in the woods in order not to offend or disturb the tikbalang.