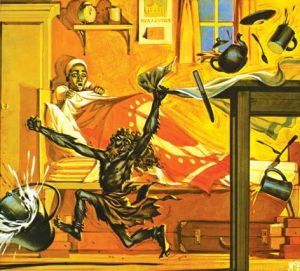 In Zulu and Bantu mythology, Tikoloshe, Tokoloshe or Hili is a mischievous and evil spirit created by magic.

Tikoloshe is described either as a bear-like humanoid or a dwarf-like water sprite. The latter would have only one arm and one leg, the face of an old man on a boy's body, and by some accounts a disproportionately long penis and a single buttock.

Every African knows what a Tokoloshe is. Some call it Tikoloshe. It looks like a very nasty looking teddy-bear in appearance, in that its head is like that of a teddy-bear, but it has got a thick, sharp, bony ridge on top of its head. Tokoloshes have a hole in their head. They are also immensely strong. The ridge goes from above its forehead to the back of its head, and with this ridge it can knock down an ox by butting it with its head. Zulu shaman Credo Mutwa

Tikoloshe are created from dead bodies by witches who direct them again their enemies. After removing the eyes and tongue from a full-sized corpse, the wizard is said to thrust a heated iron rod into the skull which reduce its size to that of a small child. Life and obedience are breathed into the tokoloshe by means of a secret powder blown into its mouth. Witches sometimes inherit these demon lovers from their mothers.

Whatever means are used to create a tokoloshe, the price includes the death of a relative within a year. The witch keeps the tokoloshe docile by cutting the fringe of hair that hangs over its eyes. In common with European myths and legends concerning familiars, salt must not be added to food offerings for tokoloshes.

Despite their small size, tikoloshe can create considerable havoc but seem to enjoy also such tricks as terrifying school children, stealing milk, raping women and biting off sleeping people’s toes. For that reason, in certain places people raise their beds on bricks with one brick laid on top of the other one, about 3 feet above the ground.

They can become invisible by swallowing a pebble and only the person who is cursed will be able to see the tokoloshe.

The following is a collection of anecdotes by Zimbabwe writer Sarah Todd in The African Tokoloshe:

Zimbabwe's Tokoloshe is large, covered in fur with long talons and a bony spine reaching all the way down its back from the top of its skull. It also has glowing red eyes, emits a foul stench and speaks in a rasping voice. Fear of them is such that many people will not sleep on the floor, and will raise their beds higher by placing bricks underneath the legs. This enables them to see one hiding underneath the bed before they retire for the night. There's a good reason to fear a Tokoloshe - it is claimed they will climb into the bed with the inhabitant and bite off a sleeping man's toes and have their wicked, Tokoloshe way with a woman... vile creatures indeed! Some people will not even mention the name Tokoloshe for fear of summoning this extremely unwelcome guest. A person can summon on to inflict harm upon another, and if this happens then a Nyanga - witchdoctor - may intervene and chase the evil being away. Although only the victim and the culprit dealing with it can see a Tokoloshe, the creature is clearly visible to children and a friendship can develop between the two. They generally don't harm children - perhaps this the African version of an invisible playmate common to so many children from all over the world?

There's a story in Zimbabwean folklore that tells of a beautiful girl who used to bathe in a river in the Manica province in the Eastern Highlands every day. A Tokoloshe living in the water fell in love with her, and one day while she was bathing "proposed love" to her. Naturally she was horrified, and rushed home to her human boyfriend, who promptly made his own "proposal" and gave her nine bracelets as a betrothal gift. Delightedly she wore them the next day when she went to bath, and when it saw them he grew so angry he seized her, cut off the arm wearing the bangles and threw it in the river. Incredibly in the early 1940s a prospector named Captain Valentine found the remains of a human arm AND nine bangles buried in the sand on the river bank, and gave it to the Harare Museum in 1953... it is apparently still resident there.