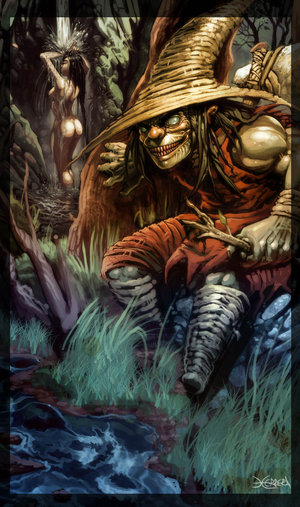 According to the traditional Chilota mythology of Chiloé (south of Chile), the trauco is a type of goblin who lives in the deep forests.

Trauco is a deformed and ugly goblin that lives on the woods and who is dressed with a conical hat and a suit made of natural fibers. His feet are mere stumps, his voice only grunts, he carries a stone axe or wooden club called Pahueldún. Tradition says he appears disguised as a priest or a wealthy landowner. He carries a branch that he uses like a walking stick. The wife of the Trauco is said to be the wicked and ugly Fiura.

Trauco lives in the holes of trees, from where he spies upon young women who wander the roads and mountains. When one gets close to him, he stares at her, leaving the woman paralyzed until she falls into a long lethargy. When she wakes she discovers that she was stained by the ill-fated dwarf.

Men of Chiloé fear the trauco, as his gaze can be deadly. On the other hand, a man strong enough can engage the trauco to serve him for one full year if he fixes his eyes on the creature first. This is a very difficult feat to accomplish, because the trauco's acute senses can perceive people coming from a long distance. Thus, stories of this kind are exceedingly rare in Chiloé.

The trauco carries a small stone-headed hatchet which he uses to strike trees in the forest to symbolize his sexual potency. Also, when a single woman is with child and no one steps forward as the father, people assume the trauco to be the missing parent. This excuses the woman from fault, as the trauco is irresistible. Thus, the trauco is sometimes invoked to explain sudden or unwanted pregnancies, especially in unmarried women. 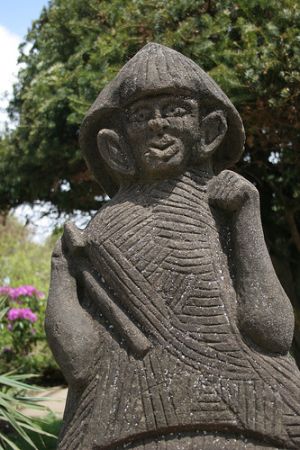 Statue of El Traco on Chiloé

Trauco is also represented as a warlock that is able to produce sickness to the kids and even the older ones. It is said that if you can get his staff and hit the ground with it, he can feel the hits. And if you carry the stick to your home and hang in over a fire, it will start to distillate oil, with which you can heal all the people who have fallen victim to the Trauco's curses. It is also said that if someone can look at the dwarf before he looks at him, the Trauco will die.