Triton is a mythological Greek god, the messenger of the deep. Over time, Triton's name and image came to be associated with a class of merman-like creatures, the Tritons, which could be male or female, and usually formed the escort of marine divinities. 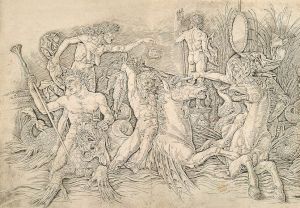 He is the son of Poseidon, god of the sea, and Amphitrite, goddess of the sea. He is sometimes cited as the father of Scylla by Lamia.

He is usually represented as a merman, having the upper body of a human and the tail of a fish. Ordinary Tritons were described in detail by the geographer Pausanias (ix. 21). A variety of Triton, the Centauro-Triton or Ichthyocentaur ("Fish-centaur"), was described as having the forefeet of a horse in addition to the human body and the fish tail. It is probable that the idea of Triton owes its origin to the Phoenician fish-deities.

Like his father, he carried a trident. However, Triton's special attribute was a twisted conch shell, on which he blew like a trumpet to calm or raise the waves. Its sound was so terrible, that when loudly blown, it put the giants to flight, who imagined it to be the roar of a mighty wild beast (Gaius Julius Hyginus, Poet. astronom. ii. 23).

According to Hesiod's Theogony, Triton dwelt with his parents in a golden palace in the depths of the sea. The story of the Argonauts places his home on the coast of Libya. When the Argo was driven ashore on the Lesser Syrtes, the crew carried the vessel to Lake Tritonis, whence Triton, the local deity, guided them across to the Mediterranean (Apollonius Rhodius iv. 1552).

Triton also appeared in Roman myths and epics. In the Aeneid, Misenus, the trumpeter of Aeneas, challenged Triton to a contest of trumpeting. The god flung him into the sea for his arrogance.