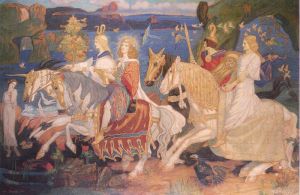 The Riders of the Sidhe by Duncan

The Tuatha Dé Danann ("peoples of the goddess Danu") are a legendary race in Irish mythology. In the invasions tradition which begins with the Lebor Gabála Érenn, they are the fifth group to settle Ireland, conquering the island from the Fir Bolg. The Epic of the Tuatha Dé Danann is the first Cycle of Irish storytelling.

The translation of Tuatha Dé Danann as "peoples of the goddess Danu" is necessarily imprecise. Old Irish tuath (plural tuatha) means "people, tribe, nation"; and dé is the genitive case of día, "god, goddess, supernatural being, object of worship". However, Danann is also a genitive, for which the nominative case is not attested. It has been reconstructed as Danu, which by analogy with Anu is taken to be a female name (Hindu mythology has a water-goddess called Danu). It is also written Donann and Domnann, which may link them with the Fir Domnann ("men of the Domnainn"), a people associated with the Fir Bolg in myth, who are historically attested in Connacht and may be related to the British Dumnonii. They also have many parallels across the Celtic world: Nuada is cognate with the British god Nodens; Lugh is a reflex of the pan-Celtic deity Lugus; Tuireann is related to the Gaulish Taranis; Ogma to Ogmios; the Badb to Catubodua.

The Dananns were descendants of the goddess Danu and skilled in art and science, poetry and magic. They are described as physically outstanding; tall, red-haired, fair-skinned, powerful aristocratic and mystical beings who mingled with mortals and yet remained aloof and superior to them.

The Tuatha Dé were descended from Nemed, leader of a previous wave of inhabitants of Ireland. They came from four northern cities, Falias, Gorias, Murias and Finias, where they acquired their occult skills and attributes. They arrived in Ireland, on or about May 1 (the date of the festival of Beltaine), on dark clouds, although later versions rationalise this by saying they burned their ships to prevent retreat, and the "clouds" were the smoke produced.

Led by their king, Nuada, they fought the First Battle of Magh Tuiredh (Moytura), on the west coast, in which they defeated and displaced the clumsy and ill-armed Fir Bolg, who then inhabited Ireland. Nuada lost an arm in the battle. Since he was no longer perfect, he could not continue as king and was replaced by the half-Fomorian Bres, who turned out to be a tyrant. The physician Dian Cecht replaced Nuada's arm with a working silver one and he was reinstated as king. Balor, the god of death, then killed him. However, Dian Cecht's son Miach was dissatisfied with the replacement so he recited the spell, "ault fri halt dí 7 féith fri féth" (joint to joint of it and sinew to sinew), which caused flesh to grow over the silver prosthesis over the course of nine days and nights. Dian Cecht slew his own son out of jealousy. Because of Nuada's restoration as leader, the half-Fomorian Bres complained to his family.

A third battle was fought against a subsequent wave of invaders, the Milesians, from the northwest of the Iberian Peninsula (present day Galicia and Northern Portugal), descendants of Míl Espáine (who are thought to represent the Goidelic Celts). The Milesians encountered three goddesses of the Tuatha Dé, Ériu, Banba and Fodla, who asked that the island be named after them; Ériu is the origin of the modern name Éire, and Banba and Fodla are still sometimes used as poetic names for Ireland.

Their three husbands, Mac Cuill, Mac Cecht and Mac Gréine, who were kings of the Tuatha Dé at that time, asked for a truce of three days, during which the Milesians would lie at anchor nine waves' distance from the shore. The Milesians complied, but the Tuatha Dé created a magical storm in an attempt to drive them away. The Milesian poet Amergin calmed the sea with his verse, before his people landed and defeated the Tuatha Dé at Tailtiu.

When Amergin was called upon to divide the land between the Tuatha Dé Danann and his own people, he cleverly allotted the portion above ground to the Milesians and the portion underground to the Tuatha Dé. The Tuatha Dé were led underground into the Sidhe mounds by The Dagda. Afterwards, they occasionally intervened in human wars on the side of justice and righteousness, armed with invisibility, flaming lances and magical white shields.

The Tuatha Dé Danann are thought to derive from the pre-Christian gods of Ireland. When the surviving stories were written, Ireland had been Christian for centuries, and the Tuatha Dé were represented as mortal kings and heroes of the distant past, but there are many clues to their former divine status. A poem in the Book of Leinster lists many of the Tuatha Dé, but ends "Although [the author] enumerates them, he does not worship them." Goibniu, Creidhne and Luchta are referred to as Trí Dé Dána ("three gods of craftsmanship"), and the Dagda's name is interpreted in medieval texts as "the good god." Even after they are displaced as the rulers of Ireland, characters such as Lugh, the Morrígan, Aengus and Manannan appear in stories set centuries later, showing all the signs of immortality. Important members are of the Tuatha Dé are: Dagda, Brigid, Nuada, Lugh, Dian Cecht, Ogma, and Lir. The goddess Danu can also be identified with the Welsh goddess Don.

In the Ulster Cycle, the Tuatha Dé Danann was still seen as Celtic deities. However, in the Fenian Cycle, the Dananns had degenerated into nothing more then fey people; in another words, the Dananns became the "Fairy People". The Tuatha Dé Danann became frequently associated with fairies. Because of the Christian influences in the myths, some of them died in old age when they leave the Otherworld; that they were baptised before their death.

The Four Treasures of the Tuatha Dé Danann

The Tuatha Dé Danann brought four magical treasures with them to Ireland:

These four treasures can be linked to the four elements, and four suits, found in Tarot and throughout pagan mythology.