Typhoeus (or Typhon) was a monstrous primitive Storm-Giant, father of many other monsters who was defeated and imprisoned by Zeus in the pit of Tartaros. For us, he is also “The Monstrous Creature” at its best. 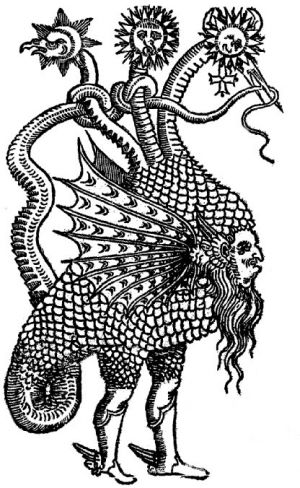 Typhon was an offspring of Gaea ("Earth") and Tartarus, born in Cilicia. Typhon fathered many monsters upon Echidna: Cerberus, the Chimaera, Orthus, the Dragon of the Esperides, the Lernean Hydra, the Nemean Lion, the Sphinx, the Caucasian Eagle, the Crommyonian Sow and vultures.

"Men say that Typhaon the terrible, outrageous and lawless, was joined in love to her [Ekhidna], [[the maid with glancing eyes. So she conceived and brought forth fierce offspring; first she bare Orthos the hound of Geryones, and then again she bare a second, a monster not to be overcome and that may not be described, Kerberos who eats raw flesh, the brazen-voiced hound of Haides, fifty-headed, relentless and strong. And again she bore a third, the evil-minded Hydra of Lerna, whom the goddess, white-armed Hera nourished, being angry beyond measure with the mighty Herakles ... She was the mother of Khimaira who breathed raging fire, a creature fearful, great, swift-footed and strong, who had three heads, one of a grim-eyed lion; in her hinderpart, a dragon; and in her middle, a goat, breathing forth a fearful blast of blazing fire. Her did Pegasos and noble Bellerophontes slay." - Hesiod, Theogony 306

Later poets described him as a volcanic-daimon, trapped beneath the ridges of Mount Aitna in Sicily. In this guise he was closely identified with the Gigante Enkelados.

Typhon was a gigantic winged monster that was part man and part beast. Typhon was also taller than the tallest mountain. Under Typhon's arms there was a hundred dragon-heads. Below his thighs were the massive coils of vipers. Typhon was a terribly horrifying sight and was deadly since flame would gush from his mouth.

Typhon was so huge that his head was said to brush the stars. He appeared man-shaped down to the thighs, with two coiled vipers in place of legs. Attached to his hands in place of fingers were a hundred serpent heads, fifty per hand.

He was winged, with dirty matted hair and beard, pointed ears, and eyes flashing fire. According to some he had two hundred hands each with fifty serpents for fingers and a hundred heads, one in human form with the rest being heads of bulls, boars, serpents, lions and leopards. As a volcano-daimon, Typhon hurled red-hot rocks at the sky and storms of fire boiled from his mouth.

"Typhon; the hands and arms of him are mighty, and have work in them, and the feet of the powerful god were tireless, and up from his shoulders there grew a hundred snake heads, those of a dreaded drakon, and the heads licked with dark tongues, and from the eyes on the inhuman heads fire glittered from under the eyelids: from all his heads fire flared from his eyes' glancing; and inside each one of these horrible heads there were voices that threw out every sort of horrible sound, for sometimes it was speech such as the gods could understand, but at other times, the sound of a bellowing bull, proud-eyed and furious beyond holding, or again like a lion shameless in cruelty, or again it was like the barking of dogs, a wonder to listen to, or again he would whistle so the tall mountains re-echoed to it." - Hesiod, Theogony 820

"Typhon was a mixture of man and beast, the largest and strongest of all Ge's children. Down to the thighs he was human in form, so large that he extended beyond all the mountains while his head often touched even the stars. One hand reached to the west, the other to the east, and attached to these were one hundred heads of serpents. Also from the thighs down he had great coils of vipers, which extended to the top of his head and hissed mightily. All of his body was winged, and the hair that flowed in the wind from his head and cheeks was matted and dirty. In his eyes flashed fire. Such were the appearance and the size of Typhon as he hurled red-hot rocks at the sky itself, and set out for it with mixed hisses and shouts, as a great storm of fire boiled forth from his mouth." - Apollodorus, The Library 1.39

Aeschylus and Pindar describe him as living in a Cilician cave. (Pind. Pyth. viii. 21; comp. the different ideas in Apollon. Rhod. ii. 1210, &c., and Herod. iii. 5.) After his defeat against Zeus, Homer and Hesiod describe Typhon and Echidna imprisoned beneath the land of the Arimoi (also known as the Arimaspoi, or Kimmeroi), a mythical race who dwelt at the ends of the earth shrouded in mist and darkness (beyond the River Okeanos). The gates of Tartaros, the usual prison of the pair, were probably believed to be found in this territory.

Even the Olympians had recently won the war against the Titans; Typhon was so fearsome and dangerous, that the younger gods feared to face the monsters. Zeus tried to fight Typhon, until the monster cut off Zeus' sinews from his hands and feet. This prevented Zeus from using his thunderbolts, Zeus' most deadly weapon. Zeus was helpless and could not prevent Typhon from imprisoning Zeus in a cave.

After some time, Hermes, the son of Zeus, recovered the sinews and rescued his father. When the sinews were restored to Zeus, he returned to fight Typhon with his thunderbolts. Zeus killed the monster by blasting his thunderbolts at Typhon, before burying the creature under Mount Aetna or the entire island of Sicily.

"Typhon was the son of Ge (the Earth), a deity monstrous because of his strength, and of outlandish appearance. There grew out of him numerous heads and hands and wings, while from his thighs came huge coils of snakes. He emitted all kinds of roars and nothing could resist his might.

He felt an urge to usurp the rule of Zeus and not one of the gods could withstand him as he attacked. In panic they fled to Aigyptos (Egypt), all except Athena and Zeus, who alone were left. Typhon hunted after them, on their track. When they fled they had changed themselves in anticipation into animal forms. Apollon became a hawk [Horus], Hermes an ibis [Thoth], Ares became a fish, the lepidotus [Lepidotus or Onuris], Artemis a cat [Neith or Bastet], Dionysos took the shape of a goat [Osiris or Arsaphes], Herakles a fawn, Hephaistos an ox [Ptah], and Leto a shrew mouse [Wadjet]. The rest of the gods each took on what transformations they could. When Zeus struck Typhon with a thunderbolt, Typhon, aflame hid himself and quenched the blaze in the sea. Zeus did not desist but piled the highest mountain, Aitna, on Typon and set Hephaistos on the peak as a guard. Having set up his anvils, he works his red hot blooms on Typhon’s neck." - Antoninus Liberalis, Metamorphoses 28

The myth of Typhon makes it clear that the Olympian gods are the heirs of the animal deities of Egypt. Typhon is then an avatar of the god Set.

"[Leto, Egyptian Buto] taking charge of Apollo [Horus] from Isis, hid him for safety in this island [Khemmis] which is now said to float, when Typhon [Set] came hunting through the world, keen to find the son of Osiris. Apollon [Horus] and Artemis [Bastet] were (they say) children of Dionysus [Osiris] and Isis, and Leto [Buto] was made their nurse and preserver; in Egyptian, Apollon is Horus, Demeter Isis, Artemis Bubastis." - Herodotus, Histories 2.156.1
"Before men, they said, the rulers of Egypt were gods, but none had been contemporary with the human priests. Of these gods one or another had in succession been supreme; the last of them to rule the country was Osiris' son Horus, whom the Greeks call Apollon; he deposed Typhon [Set], and was the last divine king of Egypt. Osiris is, in the Greek language, Dionysos." - Herodotus, Histories 2.144.1

"Osiris: Some say he was Dionysos, others say another; who was dismembered by the daimon Typhon [who was equated with the Egyptian god Set] and became a great sorrow for the Egyptians, and they kept the memory of his dismemberment for all time." - Suidas, "Osiris".

In Alchemy, Typhon, represents the Alchemical Universal Spirit of Mercury.