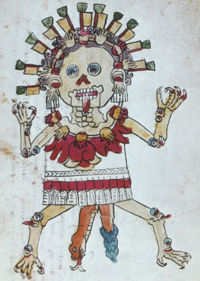 Depiction of a Tzitzimitl from the Codex Magliabechiano.

In Aztec mythology, a tzitzimitl (plural tzitzimimeh) is a celestial demon associated with the stars that battle the sun each dusk and dawn.

Tzitzimimeh means Monsters descending from above.

The Tzitzimimeh were female deities, and as such related to fertility, they were associated with the Cihuateteo and other female deities such as Tlaltecuhtli, Coatlicue, Citlalinicue and Cihuacoatl and they were worshipped by midwives and parturient women. The leader of the tzitzimime was the Goddess Itzpapalotl who was the ruler of Tamoanchan - the paradise where the Tzitzimimeh resided.

The Tzitzimimeh had a double role in Aztec religion: they were protectresses of the feminine and progenitresses of mankind. But they were also powerful and dangerous, especially in periods of cosmic instability especially during a a solar eclipse. This was interpreted as the Tzitzimimeh attacking the sun, this caused the belief that during a solar eclipse, the tzitzimime would descend to the earth and devour human beings. The Tzitzimimeh were also feared during other ominous periods of the aztec world, such as during the five unlucky days called Nemontemi which marked an unstable period of the aztec year count, and during the New Fire ceremony marking the beginning of a new calendar round - both were periods associated with the fear of change.

One story from the Histoyre du Mechique describes the wraith of the tzitzimime. Mayahuel was the goddess of maguey who lived with her grandmother, a tzitzimime, in the sky. One time, Quetzalcoatl convinced her to descend to earth with him and join with him into a forked tree with Quetzalcoatl as one branch and Mayahuel as the other.

When Mayahuel's grandmother awakens and finds her missing, she summons other tzitzimime to find her granddaughter. They descend to earth, and just as they arrive, the tree that Quetzalcoatl and Mayahuel had hidden as splits in two. Recognizing her grandmother as one of the branches, she tears it apart and passes the remains of Mayahuel to the other tzitzimime to devour, leaving the branch that Quetzalcoatl disguised himself as fully intact.

After they had left, Quetzalcoatl gathered up the Mayahuel's bones and buried them, & from that grave, the first maguey plant grew. (Maguery was the source of an alcoholic beverage that was important in Aztec ceremonies as both a ritual drink and a sacrificial offering.)