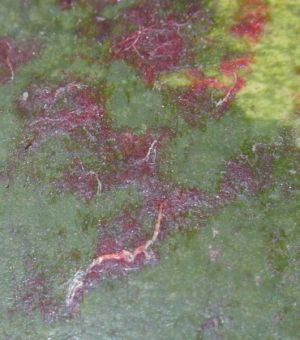 "Blood" forms naturally on a few square centimeters of the outside of an aged watermelon. Another picture shows the whole melon

Vampire pumpkins and watermelons are a folk legend from the Balkans, in southeastern Europe, described by ethnologist Tatomir Vukanović. The story is associated with the Roma people of the region, a notorious people in the traditional vampire folklore.

The belief in vampire fruit is similar to the belief that any inanimate object left outside during the night of a full moon will become a vampire. According to tradition, watermelons or any kind of pumpkin kept more than ten days or after Christmas will become a vampire, rolling around on the ground and growling to pester the living. But people have little fear of the vampire pumpkins and melons because of the creatures' lack of teeth.

Vampires of vegetable origin are believed to have the same shape and appearance as the original plant. One of the main indications that a pumpkin or melon is about to undergo a vampiric transformation (or has just completed one) is said to be the appearance of a drop of blood on its skin.

The only known reference in scholarship is Tatomir Vukanović's account of his journeys in Serbia from 1933 to 1948. He wrote several years later in the Journal of the Gypsy Lore Society:

The belief in vampires of plant origin occurs among Gs. [Gypsies] who belong to the Mosl. faith in KM [Kosovo-Metohija]. According to them there are only two plants which are regarded as likely to turn into vampires: pumpkins of every kind and water-melons. And the change takes place when they are 'fighting one another.' In Podrima and Prizrenski Podgor they consider this transformation occurs if these vegetables have been kept for more than ten days: then the gathered pumpkins stir all by themselves and make a sound like 'brrrl, brrrl, brrrl!' and begin to shake themselves. It is also believed that sometimes a trace of blood can be seen on the pumpkin, and the Gs. then say it has become a vampire. These pumpkins and melons go round the houses, stables, and rooms at night, all by themselves, and do harm to people. But it is thought that they cannot do great damage to folk, so people are not very afraid of this kind of vampire.
Among the Mosl. Gs. in the village of Pirani (also in Podrima) it is believed that if pumpkins are kept after Christmas they turn into vampires, while the Lešani Gs. think that this phenomenon occurs if a pumpkin used as a syphon, when ripe and dry, stays unopened for three years.

The Gs. in KM. destroy pumpkins and melons which have become vampires … by plunging them into a pot of boiling water, which is then poured away, the vegetables being afterwards scrubbed by a broom and then thrown away, and the broom burned.

The story was popularised by Terry Pratchett's 1998 book Carpe Jugulum, a comic fantasy novel making extensive use of vampire legends. Pratchett has stated that he did not invent the vampire watermelon story himself. It is found in several other works: Jan Perkowski's 1976 book reprinted Vukanović's account, and recent popular books on the topic of vampirism include a mention.

Part of this article consists of modified text from Wikipedia, and the article is therefore licensed under GFDL.
Retrieved from "https://www.monstropedia.org/index.php?title=Vampire_pumpkin&oldid=6448"
Categories: