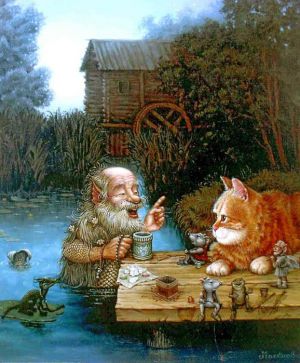 In Slavic mythology, the vodyanoy (plural vodyanoyovia) is a water spirit.

In Czech fairy tales Vodníci are good creatures in green tail-coat, whereas in Russian (and other East-Slavic) Vodyanoyovia have similar ways as the wassermann or nix of German fairy tales.

The vodyanoy is said to appear as an old man with a bald head, large belly, round cheeks and green clothes either in green clothes or with his body covered in algae and muck. He wears a high, pointed hat made of reed. In his most appaling appearance, he has webbed paws instead of hands, a fish's tail, eyes that burn like red-hot coals. He usually rides along his river on a half-sunk log, making loud splashes. Consequently, he is often dubbed "grandfather" or "forefather" by the local people.

In Russian tales the vodyanoy is a master shape-shifter who is said to live in a whirlpool, or in an underwater palace made from the treasures of sunken ships, the sunken ships themselves and crystals. In Czech tales vodníci live in rivers, pools and lakes, preferably close to a water-mill. Sometimes he can be seen sitting on the river bank combing his long, green hair and beard.

The vodyanoy can assume many different forms that enable him to deceive and trap his victims. He would appear in the shape of a handsome young man or a well-known person from the village. He is also said to hide during the day as a trout or an old salmon,