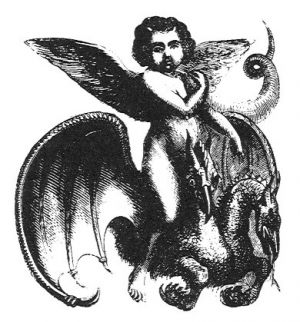 In demonology, Volac is the mighty Great President of Hell.

Volac is the mighty Great President of Hell having thirty (thirty-eight to other authors) legions of demons under his command.

Volac is said to give true answers about hidden treasures; he tells of the positions of the planets and reveals where serpents can be seen, and delivers them harmless to the magician.

Volac appears as a child with angel's wings and riding on a two-headed dragon.

Valac is a great president, and commeth abroad with angels wings like a boie, riding on a twoheaded dragon, he perfectlie answereth of treasure hidden, and where serpents may be seene, which he delivereth into the conjurors hands, void of anie force or strength, and hath dominion over thirtie legions of divels. Pseudomonarchia daemonum - Johann Wier (1583)

The Sixty-second Spirit is Volac, or Valak, or Valu. He is a President Mighty and Great, and appeareth like a Child with Angel's Wings, riding on a Two-headed Dragon. His Office is to give True Answers of Hidden Treasures, and to tell where Serpents may be seen. The which he will bring unto the Exorciser without any Force or Strength being by him employed. He governeth 38 Legions of Spirits, and his Seal is thus. Goetia - S. L. MacGregor Mathers (1904)