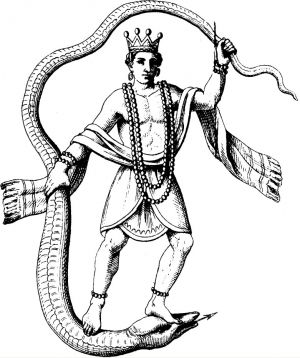 In the early Vedic religion, Vritra(Sanskrit: वृत्र (Devanāgarī) or Vṛtra (IAST)) was an Asura and also a serpent or dragon, the personification of drought and enemy of Indra.

Vritra means 'the enveloper', he was also known in the Vedas as Ahi ("snake"). Cataputha-Brahmana says that he was created by Tvashta "of soma cast upon the fire; he grew thereafter an arrowshot in all directions until he had forced back the oceans and enveloped the worlds".

According to the Srimad Bhagavata Purana, Vritra was a King named Chitraketu in his previous birth. While coursing the skies in his chariot, he saw the half-woman (Ardha-Nari) form of Lord Shiva and made a disparaging comment on it. For this sin, he was cursed to be born as a demon in his next birth.

In most descriptions, Vrita appears as a snake or a three-headed dragon.

According to the Rig Veda, Vritra kept the waters of the world captive until he was killed by Indra, who destroyed all the ninety-nine fortresses of Vritra (although the fortresses are sometimes attributed to Sambara) before liberating the imprisoned rivers. The combat began soon after Indra was born, and he had drunk a large volume of Soma at Tvashtri's house to empower him before facing Vritra. Tvashtri fashioned the thunderbolt (Vajrayudha) for Indra, and Vishnu, when asked to do so by Indra, made space for the battle by taking the three great strides for which he became famous. Vritra broke Indra's two jaws during the battle, but was then thrown down by the latter and, in falling, crushed the fortresses that had already been shattered. For this feat, Indra became known as Vritrahan "slayer of Vritra" and also as "slayer of the first-born of dragons". Vritra's mother, Danu (who was also the mother of the Danava race of Asuras), was then attacked and defeated by Indra with his thunderbolt. In one of the versions of the story, three Asuras - Varuna, Soma and Agni - were coaxed by Indra into aiding him in the fight against Vritra whereas before they had been on the side of the demon (whom they called "Father").

Some modern Indian geologists interpret the Vedic story as a description of the breakup of glaciers. B.P. Radhakrishna writes: "Geological record indicates that during Late Pleistocene glaciation, the waters of the Himalaya were frozen and that in place of rivers there were only glaciers, masses of solid ice. As and when the climate became warmer, the glaciers began to break up and the frozen water held by them surged forth in great floods, inundating the alluvial plains in front of the mountains.... no wonder the early inhabitants of the plains burst into song praising Lord Indra for breaking up the glaciers and releasing water which flowed out in seven mighty channels (Sapta Sindhu). The analogy of a slowly moving serpent (Ahi) for describing the Himalayan glacier is most appropriate".

In one verse of a Rig-Vedic hymn eulogising Sarasvati, the latter is credited with the slaying of Vritra. Mention of this occurs nowhere else.

If, however, the above interpretation by B.P. Radhakrishna and other geologists is correct, then the Rig-Veda's description of Sarasvati as taking the life-force of Vritra could be an analogy referring to the goddess being the personification of a river. In Vedic times, the Sarasvati was main river channeling the Himalayan melt-waters to the ocean.

In a later version of the myth, Vritra was created by Tvashtri to avenge the killing of his son by Indra, known as Trisiras or Visvarupa. Vritra won the battle and swallowed Indra, but the other gods forced him to vomit Indra out. The battle continued and Indra was eventually forced to flee. Vishnu and the rishis brokered a truce, with Indra swearing that he would not attack Vritra with anything made of metal, wood or stone, nor anything that was dry or wet, or during the day or the night. Indra used the foam (which Vishnu had entered to ensure victory) from the waves of the ocean to kill him at twilight. However ,in some places, Hindu scriptures also recognize Vritra as a bhakta of Vishnu who was slain only due to his failure to live piously and without aggression. This story runs thus:

Vritra (a brahmin in this version) became the head of the Asuras (portrayed as inherently demonic here, as opposed to the Vedic version in which they can be gods or demons). He renounced his dharma – duty – to do good unto others and turned to violence, battling with the devas. Eventually, he gained the upper hand and the Devas were frightened of his evil might. Led by Indra, they approached Lord Vishnu for help. He told them that Vritra could not be destroyed by ordinary means, revealing that only a weapon made from the bones of a sage could slay him. When the deities revealed their doubts about the likelihood of any ascetic donating his body, Vishnu directed them to approach the sage (Rishi) Dadichi. When approached by the gods, Dadhichi gladly gave up his bones for the cause of the good, stating that it would be better for his bones to help them attain victory than to rot in the ground. The Devas collected the bones and Indra crafted the Vajrayudha from them. When they engaged Vritra again, the battle lasted for 360 days before the brahmin breathed his last.

In both of these versions (either for killing Trisiras or the brahmin Vritra), the terrible anthropomorphic personification of Brahmanahatya (Brahmanicide) chased Indra and forced him into hiding for his sin, and Nahusha was invited to take his place.

The story of Indra only being able to kill Vritra when certain conditions were met could have been the origin or prototype of the Ramayana story, in which the gods could not kill Ravana because of a boon, and he was too powerful to be slain by any humans (the loophole in this case was that a god incarnated as a man, i.e. Rama, was able to kill him). This story also probably inspired the legend of the Narasimha avatara of Vishnu. The similarities are that Hiranyakashipu, the Asura king, obtained a boon from Brahma that he could not be killed during the day or at night, nor by man or beast, neither indoors nor outdoors and by no weapon.In order to slay the Asura, Vishnu took the incarnation of a lion headed man, who was neither fully man nor fully a beast (Narasimha literally means man-lion). Narasimha used his nails, rather than weapons which would have proved ineffectual, to kill the Asura and placed him on the doorstep, which was neither indoors nor outdoors. He killed him at twilight, which was neither day nor night.

Part of this article consists of modified text from Wikipedia, and the article is therefore licensed under GFDL.
Retrieved from "https://www.monstropedia.org/index.php?title=Vritra&oldid=11506"
Categories: