In Philippine mythology, Wakwak refers to a vampiric bird-like creature or a witch. 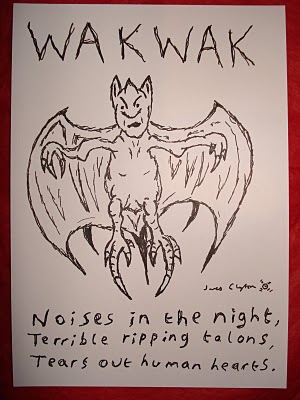 Wakwak is assumed to grab humans at night as its prey, just like Manananggal and the Ekek who can fly. It likes to haunt in the rural areas of the Philippines. The Wakwak has no ability to separate its torso from its body. Some people believed that it is a night bird that belongs to a witch.

The Wakwak makes a sound by flapping its make while flying. The sound that it produced is typically linked to the presence of an Unglu (vampire) or Ungo (ghost or monster). The Wakwak’s sound also indicates that it is searching for victims. When the sound is loud, it means that it is far from you. If not, then it is near you and ready to attack. The Wakwak rips and maims its victims and then feeds on their hearts.

The old folks described the Wakwak as creatures with long sharp talons and pair of wings just like bats. Its talons or claws are used in slashing its victims and getting their hearts.