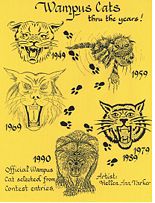 The Wampus cat is a legendary creature in Cherokee mythology. This is also a monster of the fearsome critters variety, used by the lumberjack community of the United States.

According to the tale, a Native American woman disguised herself in the skin of a mountain lion to spy on the men of the tribe as they sat around the campfire and told sacred stories on a hunting trip. When the woman was discovered, the tribe's medicine man punished her by transforming her into a half-woman, half-cat, who supposedly still haunts the forests of East Tennessee.

Another legend of the Wampus Cat comes from the Eastern part of Alabama. Supposedly, a secret program was carried out by the government in the 1940s to create an agile, fierce message carrier to be utilized on the European front during World War II, much like passenger pigeons were used in World War I.

This program was based near Cheaha Mountain in the Talladega Forest, an area that was and remains very sparsely settled. The creature was part Mountain Lion and part Gray Wolf. However, several male and female specimens of the newly created species escaped and were never captured. Sightings of these hybrid creatures have been reported in the area ever since, with (supposed) sightings occurring as far south as the Everglades and as far north as the Great Smoky Mountains. They have also been blamed for breaking into chicken coops, mauling livestock, and even stalking humans. Several instances have been recorded of actual attacks, but most are believed to have been mountain lion attacks.