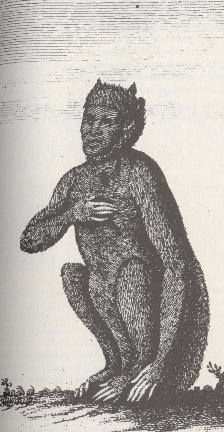 An engraving from 1763 depicting a "weretiger"

Werecats (also written in a hyphenated form as were-cats) are creatures of folklore, fantasy fiction, horror fiction, and occultism that are generally described as shapeshifters similar to werewolves that, instead of a wolf, turn into a creature that is based on some species of feline.<ref name="supernatural">Bleiler, Everett. The Guide to Supernatural Fiction (Kent State University Press; 1983) p.272</ref><ref name="nightwerecat">Stine, R. L. Night of the Werecat (Aladdin; 1996)</ref><ref name="werecatusage">Galenorn, Yasmine. Witchling (Berkley; 2006) p.12</ref><ref name="occultwerecat">Greene, Rosalyn. The Magic of Shapeshifting (Weiser; 2000) p.8</ref> The species involved can be a domestic cat, a tiger, a lion,<ref name="werelion">Feehan, Christine Lair of the Lion )(Leisure Books; 2002)</ref> a leopard,<ref name="wereleopard">Worland, Rick. The Horror Film: An Introduction (Blackwell Publishing; 2006) pp73, 176–178, 184</ref> or a lynx. Typically, an individual werecat can only transform to one unique feline, not to a number of different species, and each individual type of werecat may be known by a more species-specific term such as "weretiger".<ref name="summerswerejaguartiger">Summers, Montague. The Werewolf (University Books; 1966) p21</ref> The word "werecat" was not coined until the late 19th century, so it was not directly used in legends from earlier eras, only by later folklorists' commentary.

Werecat folklore is found on all continents except Antarctica and Australia and is generally based on wild felines native to the area.

European folklore usually depicts werecats who transform into domestic cats. Some European werecats became giant domestic cats or black panthers. They are generally labeled witches, even though they may have the sole magical ability of self-transformation.<ref name="hamelwitchwerecats">Hamel, Frank. Human Animals (University Books; 1969) pp7, 103–109</ref> During the witch trials, official Church doctrine stated that all shapeshifters, including werewolves, were witches.<ref name="hammerwitchesshapeshift">Summers, Montague. The Malleus Maleficarum of Heinrich Kramer and James Sprenger (Book Tree; 2000) pp61–65</ref>

African legends describe people who turn into lions or leopards. In the case of leopards, this is often because the creature is really a leopard god or goddess masquerading as a human. When these gods mate with humans, offspring can be produced, and these children sometimes grow up to be shapeshifters; those who do not transform may instead have other powers. In reference to werecats who turn into lions, the ability is often associated with royalty. Such a being may have been a king or queen in a former life, or may be destined for leadership in this life. This quality can be seen in the lions of Tsavo, which were reputed to be kings in lion shape, attempting to repel the invading Europeans by stopping their railroad.

Mainland Asian werecats usually become tigers.<ref name="summerswerejaguartiger" /> In India, the weretiger is often a dangerous sorcerer, portrayed as a menace to livestock, who might at any time turn to man-eating. Chinese legends often describe weretigers as the victims of either a heredity curse or a vindictive ghost. Ancient teachings held that every race except the Han Chinese were really animals in disguise, so that there was nothing extraordinary about some of these false humans reverting to their true natures. Alternately, the ghosts of people who had been killed by tigers could become malevolent supernatural beings, devoting all their energy to making sure that tigers killed more humans. Some of these ghosts were responsible for transforming ordinary humans into man-eating weretigers. Also, in Japanese folklore there are creatures called bakeneko that are similar to kitsune (fox spirits) and tanuki (raccoon dogs).

In both Indonesia and Malaysia there is another kind of weretiger.<ref name="javaweretigerstuff">Encyclopædia Britannica Eleventh Edition (1910-1911)</ref> The power of transformation is regarded as due to inheritance, to the use of spells, to fasting and willpower, to the use of charms, etc. Save when it is hungry or has just cause for revenge, it is not hostile to man; in fact, it is said to take its animal form only at night and to guard the plantations from wild pigs, exactly as the balams (magicians) of Yucatán were said to guard the maize fields in animal form. Variants of this belief assert that the shapeshifter does not recognize his friends unless they call him by name, or that he goes out as a mendicant and transforms himself to take vengeance on those who refuse him alms. Somewhat similar is the belief of the Khonds; for them the tiger is friendly, and he reserves his wrath for their enemies. A man is said to take the form of a tiger in order to wreak a just vengeance.<ref name="javaweretigerstuff"/>

The foremost were-animal in pre-Columbian Mesoamerican cultures was the were-jaguar. It was associated with the veneration of the jaguar, with priests and shamans among the various peoples who followed this tradition donning the skins of jaguars to "become" a were-jaguar. Among the Aztecs, an entire class of specialized warriors who dressed in jaguar skins were called "jaguar warriors". Depictions of the jaguar and the were-jaguar are among the most common motifs among the artifacts of the ancient Mesoamerican civilizations.

Archeologists have found a jar in Guatemala, attributed to the Maya of the Late Classic Era (600-900 AD), which depicts a musical instrument that has been reproduced and played. This instrument is astonishing in at least two respects. First, it is the only stringed instrument known in the Americas prior to the introduction of European musical instruments. Second, when played, it produces a sound virtually identical to a jaguar's growl.[1].

In modern South America, there are also urban legends about jaguar shapeshifters lurking along highways in tales similar to the modern vanishing hitchhiker, and of their being assassins secretly employed by the government or organized crime.

In the U.S., urban legends tell of encounters with feline bipeds; beings similar to the Bigfoot having cat heads, tails, and paws. Feline bipeds are sometimes classified as part of cryptozoology, but more often they are interpreted as werecats.<ref name="felinebipedsbrad">Steiger, Brad. Out of the Dark (Kensington Books; 2001) pp154–160</ref>

Assertions that werecats truly exist and have an origin in supernatural or religious realities have been common for centuries, with these beliefs often being hard to entirely separate from folklore. In the nineteenth century, occultist J.C. Street asserted that material cat and dog transformations could be produced by manipulating the "ethereal fluid" that human bodies are supposedly floating in.<ref name="hameloccultwerecats">Hamel, Frank. Human Animals (University Books; 1969) p.292</ref> The Catholic witch-hunting manual, the Malleus Maleficarum, asserted that witches can turn into cats, but that their transformations are illusions created by demons.<ref name="hammerwitchesshapeshift"> New Age author John Perkins asserted that every person has the ability to shapeshift into "jaguars, bushes, or any other form" by using mental power.<ref name="perkinsjaguar">Perkins, John. Shape Shifting (Destiny Books; 1997) p.3</ref> Occultist Rosalyn Greene claims that werecats called "cat shifters" exist as part of a "shifter subculture" or underground New Age religion based on lycanthropy and related beliefs.<ref name="occultwerecat" />

Part of this article consists of modified text from Wikipedia, and the article is therefore licensed under GFDL.
Retrieved from "https://www.monstropedia.org/index.php?title=Werecat&oldid=12413"
Category: