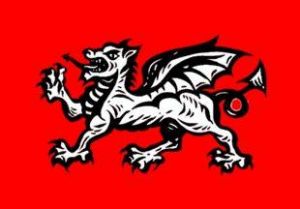 The White Dragon is reputedly a symbol of Anglo-Saxon England.

A metaphorical reference to the 'White Dragon', was made by Geoffrey of Monmouth in the 'Ancient Prophecies of Merlin' and Historia Regum Britanniae. This talks of a battle between a Red Dragon and a White Dragon. Monmouth implies that the Red represented the native Britons or Brythons and the White represented the invading Saxons. Monmouth's ideas were taken from the earlier writings of Nennius, who talked of a red and a white serpent in combat representing dragons, in turn representing the nations of the Britons and the Saxons in the book Historia Britonum. Neither makes any specific reference to actual physical use of either emblem by the Saxons or Brythons.

Evidence as a symbol of the English

Apart from the Monmouth reference, no other evidence can be found to support the existence of the white dragon as an emblem of England. Varying accounts exist of Dragons being used by the English however, but none specifically white. A Dragon Standard is seen on the Bayeux Tapestry and accounts of Dragons being used as standards continue to exist after the Norman Conquest. However, none of these were white.

There is no mention of a white dragon in the Anglo-Saxon Chronicle or Bede's Historia ecclesiastica gentis Anglorum, both of which are Anglo-Saxon writings from the period. The Kingdom of Wessex, according to Henry of Huntingdon and Matthew of Westminster used a Golden Dragon, which appears to have been used at the Battle of Hastings and depicted at least once on the Bayeux Tapestry at King Harold II's death. 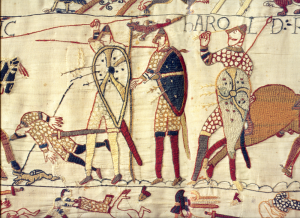 Several depictions of dragons are used by people within the tapestry:

Note that the second two are likely to be the same dragon standard.

Other than the reference by Nennius( who only referred to a white serpent in double metaphor) and Geoffrey of Monmouth, there are no other written or pictorial references to a white dragon existing or being used by any of the Germanic tribes who migrated to Britain in the first millennium. The English Flag Society have argued that the flag should be white, but appeared as golden/yellow because lack of bleaching agents at the time have made it appear as golden. However, white is used in the tapestry (as shown in the Norman white dragon shield), as well as yellow and red in the dragon standards.

Jeweller Rhiannon of Tregaron designed a Morse (clasp) for the enthronement vestments of the present Archbishop of Canterbury; Dr Rowan Williams, which depicted a red dragon and a white dragon(specifically representing England and Wales) greeting each other in peace. It references the Geoffrey of Monmouth legend.

The English Flag Society recently created a flag and claim that this should be representative of an ethnic-English community, also claiming this should subsequently replace the St George Cross. They further claim that St George should be replaced as the patron Saint of England by Saint Edmund. These same claims are echoed by another site selling white dragon merchandise.

Today the symbol is widespread and many English Nationalist groups are using it, in one variant or another.

Whet the bright steel,
Sons of the White Dragon!
Kindle the torch,
Daughter of Hengist!
The steel glimmers not for the carving of the banquet,
It is hard, broad and sharp pointed;
The torch goeth not to the bridal chamber,
It steams and glitters blue with sulpher.
Whet the steel, the raven croaks!
Light the torch, Zernebrock is yelling!
Whet the steel, sons of the Dragon!
Kindle the torch, daughter of Hengist!

The black clouds are low over the thane’s castle:
The eagle screams-he rides on their bosom.
Scream not, grey rider of the sable cloud,
Thy banquet is prepared!
The maidens of Valhalla look forth,
The race of Hengist will send them guests.
Shake your black tresses, maidens of Valhalla!
And strike your loud timbrels for joy!
Many a haughty step bends to your halls,
Many a helmed head.

Dark sits the evening upon the thane’s castle,
The black clouds gather round;
Soon shall they be red as the blood of the valiant!
The destroyer of forests shall shake his red crest against them;
He, the bright consumer of palaces,
Broad waves he his blazing banner,
Red, wide, and dusky,
Over the strife of the valiant;
His joy is the clashing swords and broken bucklers;
He loves to lick the hissing blood as it bursts warm from the wound!

All must perish!
The sword cleaveth the helmet;
The strong armour is pierced by the lance:
Fire devoureth the dwelling of princes,
Engines break down the fences of battle.
All must perish!
The race of Hengist is gone-
The name of Horsa is no more!
Shrink not then from your doom, sons of the sword!
Let your blades drink blood like wine;
Feast ye in the banquet of slaughter,
By the light of blazing halls!
Strong be your swords while your blood is warm.
And spare neither for pity nor fear,
For vengeance hath but an hour;
Strong hate itself shall expire!
I also must perish.

Part of this article consists of modified text from Wikipedia, and the article is therefore licensed under GFDL.
Retrieved from "https://www.monstropedia.org/index.php?title=White_Dragon&oldid=11508"
Categories: