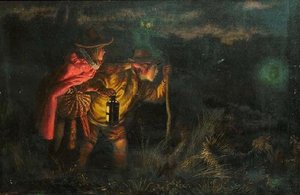 Will o the Wisp by Arthur Hughes

The will o' the wisp or ignis fatuus, or in plural form as ignes fatui ("fool's fire(s)") is the phenomenon of ghostly lights sometimes seen at night or in twilight hovering over damp ground in still air, often over bogs. The will o' the wisp is said to recede if approached. Much folklore has attached to the legend, despite possible scientific explanations.

The name "Will-o'-the-wisp", or "Will of the wisp" (a wisp is a bundle of burning hay) is very similar to "Jack o' lantern" ("Jack of the Lantern"), and indeed the two terms were originally synonymous. Both refer to an old Celtic folktale, retold in different forms across Ireland, Scotland, and northern England. One version, from Shropshire, recounted by Katherine Mary Briggs in her book A Dictionary of Fairies, refers Will the Smith. Will is a wicked blacksmith who is given a second chance by Saint Peter at the gates to Heaven, but leads such a bad life that he ends up being doomed to wander the Earth. The Devil provides him with a single burning coal with which to warm himself, which he then used to lure foolish travellers into the marshes. (compare Wayland Smith)

The lights are also often referred to as corpse candles, as in the Denham Tracts and by J. R. R. Tolkien, hobby lanterns (another term from the Denham Tracts), or by any of the various names having to do with what one supposes the lights to be (ghosts, elementals, etc.).

Among European rural people, especially in Gaelic and Slavic folk cultures, the will o' the wisps is held to be mischievous spirits of the dead or other supernatural beings attempting to lead travellers astray (compare Puck). Sometimes they are believed to be the spirits of unbaptized or stillborn children, flitting between heaven and hell (compare Wilis). Modern occultist elaborations bracket them with the salamander, a type of spirit wholly independent from humans (unlike ghosts, which are presumed to have been humans at some point in the past). They also fit the description of certain types of fairy, which may or may not have originated as human souls.

Finns, Danes and Baltic people amongst some other groups believed will o' the wisp is marking a treasure. Treasure was deep in ground or water, and could be taken only when the fire was there. Sometimes magical tricks were required as well, to uncover the treasure. It was also believed in Finland and other northern countries that midsummer was the best time to search the will o' the wisps (and treasures below them). It was believed that when someone hid treasure in the ground, (s)he made the treasure available only at the midsummer, and set will o' wisp to mark that exact place and time so that (s)he could come to take the treasure back. Finns also believed that the creature guarding the treasure used fire to clean precious metals bright again. Yet another Finnish explanation of will o wisp was that it was a ghost of a dead child.

The Will o' the Wisp can be found in numerous folk tales around the British Isles, and is often a malicious character in the stories. Wirt Sikes in his book British Goblins mentions a Welsh tale about a Will o' the Wisp (Pwca). A peasant travelling home at dusk spots a bright light travelling along ahead of him. Looking closer, he sees that the light is a lantern held by a "dusky little figure" which he follows for several miles. All of a sudden he finds himself standing on the edge of a vast chasm with a roaring torrent of water rushing below him. At that precise moment the lantern carrier leaps across the gap, lifts the light high over its head, lets out a malicious laugh and blows out the light, leaving the poor peasant a long way from home, standing in pitch darkness at the edge of a precipice. This is a fairly common cautionary tale concerning the phenomenon; however, the Ignis Fatuus were not always considered dangerous. There are some tales told about the Will o' the Wisp being guardians of treasure, much like the Irish leprechaun leading those brave enough to follow them to sure riches. Other stories tell of travelers getting lost in the woodland and coming upon a Will o' the Wisp and depending on how they treated the Will o' the Wisp, the spirit would either get them lost further in the woods or guide them out.

One possible naturalistic and scientific explanation for such phenomena is that the oxidation of hydrogen phosphide and methane gases produced by the decay of organic material may cause glowing lights to appear in the air. Experiments, for example, done by the Italian chemists Luigi Garlaschelli and Paolo Boschetti, have replicated the lights by adding chemicals to the gasses formed by rotting compounds. Critics claim that this theory does not easily account for reported cases which claim lights bob, swoop, soar upwards or downwards, or move against the wind.

William Corliss writes, in Remarkable Luminous Phenomena in Nature (Sourcebook Project, Glen Arm, MD, 2001:290): "No satisfactory mechanism has been demonstrated whereby gases escaping from marshy areas will spontaneously ignite. Furthermore, most low-level nocturnal lights are cold--not what one would expect from burning methane. Also, no one has explained how clouds of luminous gas can maintain size and shape while engaging in erratic maneouvers over many minutes."

Others believe bioluminescent effects (e.g. honey fungus) cause the light. Other explanations include causes similar to ball lightning.

More recently, under the broader banner of 'Earth Lights', pseudoscientific theories as to how they are produced have been put forward by Professors Derr & Persinger, and Paul Devereux (who, in some circles, is considered the 'authority' on earth lights of various kinds, including ball lightning, St. Elmo's Fire and lights associated with earthquakes). Derr & Persinger put forward the theory that earth lights may be generated by tectonic strain. (NB. These are faults in the earths crust, similar to, indeed including, earthquake faults.) The theory goes that the strain causes heat in the rocks, vaporising the water in them. Piezoelectric rocks such as quartz then produce electricity, which is channeled up through this column of vaporised water, until it reaches the surface - somehow displaying itself in the form of earth lights. This theory would assert that the majority of earth lights are seen over places of tectonic strain. If it is correct, it would explain why such lights often behave in an erratic and even seemingly intelligent manner, often defying the laws of gravity. Paul Devereux's explanation, however, is much broader. He thinks that the link between the lights and the landscape is more tenuous. He says that they are probably related to many things: tectonic strain, weather conditions, local geography, 'ley lines', terrain, water table depth and so forth. This explanation, however, is rejected by most experts as highly unscientific.

Other similar theoretical explanations, however, involving light emanating from naturally occurring electric currents do not involve pseudoscientific elements. Also, electric-based theories more easily account for the claimed seemingly free movement of the lights and claims that the lights react upon the introduction of nearby objects (e.g. humans).

Another theory was put forward claiming these lights are barn owls with luminescent plummage. Hence the posibility of them floating around, reacting to other lights, etc. See A Review of accounts of luminosity in Barn Owls Tyto alba.

In literature, Will o' the wisp often has a metaphorical meaning, describing any hope or goal that leads one on but is impossible to reach, or something one finds sinister and confounding.

Some examples of references in literature are:

"About, about in reel and rout,
The death-fires danced at night;
The water, like a witch's oils,
Burnt green, and blue and white"

"Suddenly, away on our left I saw a faint flickering blue flame. The driver saw it at the same moment... the flame appeared so near the road, that even in the darkness around us I could watch the driver's motions. He went rapidly to where the blue flame arose, it must have been very faint, for it did not seem to illumine the place around it at all, and gathering a few stones, formed them into some device... When he stood between me and the flame he did not obstruct it, for I could see its ghostly flicker all the same. This startled me, but as the effect was only momentary, I took it that my eyes deceived me straining through the darkness."[1]

"At last Sam could bear it no longer. 'What's all this, Gollum?' he said in a whisper. 'These lights? They're all round us now. Are we trapped? Who are they?'
Gollum looked up. A dark water was before him, and he was crawling on the ground, this way and that, doubtful of the way. 'Yes, they are all round us,' he whispered. 'The tricksy lights. Candles of corpses, yes, yes. Don't you heed them! Don't look! Don't follow them! Where's the master?'
Sam looked back and found that Frodo had lagged again. He could not see him. He went some paces back into the darkness, not daring to move far, or to call in more than a hoarse whisper. Suddenly he stumbled against Frodo, who was standing lost in thought, looking at the pale lights. His hands hung stiff at his sides; water and slime were dripping from them.
'Come, Mr. Frodo!' said Sam. 'Don't look at them! Gollum says we mustn't." -The Passage of the Marshes, The Two Towers

The phenomenon is also known as: