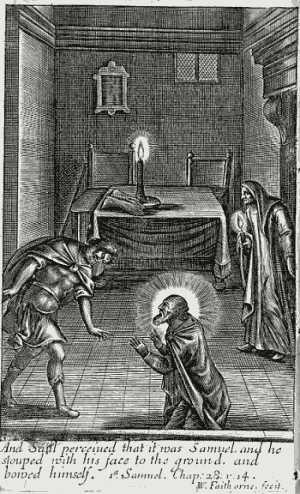 The Witch of Endor: from the frontispiece to Sadducismus Triumphatus by Joseph Glanvill

In the Hebrew Bible, the Witch of Endor of the First book of Samuel, chapter 28:4–25, was a witch, a woman "who possesses a talisman", through which she called up the ghost of the recently deceased prophet Samuel, at the demand of King Saul of Israel. After Samuel's death and burial with due mourning ceremonies in Ramah, Saul had driven all necromancers and magicians from Israel. Then, in a bitter irony, Saul sought out the witch, anonymously and in disguise, only after he received no answer from God from dreams, prophets or the Urim and Thummim as to his best course of action against the assembled forces of the Philistines. The prophet's ghost offered no advice but predicted Saul's downfall as king.

Saul sinned further in consulting this woman; the practice of necromancy was forbidden by the Torah.

The Church Fathers and some modern Christian writers have debated the theological issues raised by this text, however. If one interprets the Bible literally, it would appear to affirm that it is or was possible for humans to summon the spirits of the blessed dead by magic. Medieval glosses naturally suggested that what the witch actually summoned was not the ghost of Samuel, but a demon taking his shape. Christian author Hank Hanegraaff argues that although it is impossible for humans to summon the dead, Samuel did appear before Saul and the witch by a sovereign act of God. Hanegraaff interprets the passage to mean that the witch was surprised by these events.

Regardless of the reality of the witch's power, the story can be seen as a satire on Saul. Once Saul was the righteous king who upheld God's law by his sword; having fallen from God's favour, he is reduced to participating in forbidden rituals. He is given no counsel from the ghost of Samuel, who instead appears to confirm his doom.

The tale of the Witch of Endor is likely the inspiration for the name of Endora, Samantha's mother on the TV series Bewitched. It is also possible that this story inspired both J.R.R. Tolkiens Endor, as well as the forest moon of Endor from Star Wars VI: Return of the Jedi.