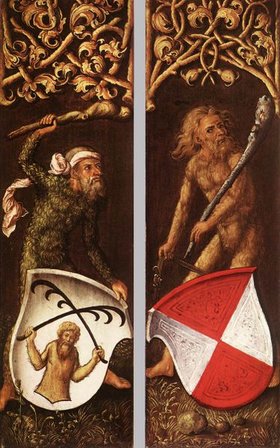 Woodwoses support coats of arms in the side panels of a portrait by Albrecht Dürer, 1499 (Alte Pinakothek, Munich) 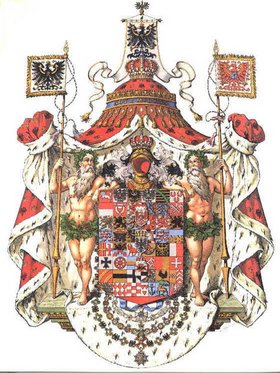 The Woodwose or hairy wildman of the woods was the Sasquatch figure of pre-Christian Gaul, in Anglo-Saxon a wuduwasa.

Images of woodwoses appear in the carved and painted roof bosses where intersecting ogee vaults meet in the cathedral of Canterbury, in positions where one is also likely to encounter the vegetal Green Man. The Woodwose was a link between civilized humans and the dangerous elf-like spirits of natural woodland, such as Puck. The wildman, pilosus or hairy all over, often armed with a rough club, survived to appear as supporter for heraldic coats-of-arms, especially in Germany (Wilder Mann), well into the 16th century (illustration, below right).

A British example can be found on the coat-of-arms used as the public house sign for the Woodhouse Arms in Corby Glen, Lincolnshire. As this illustrates, various spellings of the word have been used over the centuries, for example woodhouse and wodehouse (pronounced 'wood-house', with the accent on the first syllable, as in the surname of the author P.G. Wodehouse; wodwo, the Middle English version, appears (as 'wodwos', the plural) in the 14th-century poem Sir Gawayne and the Grene Knyght; it was used by poet Ted Hughes as the title of a poem and, in 1967, a volume of his collected works.

King Charles VI of France and five of his courtiers were dressed as woodwoses and chained together for a mascarade at the tragic Bal des Sauvages (later known as the Bal des Ardents) at the Queen Mother's Paris hotel, January 28, 1393. In the midst of the festivities, a stray spark from a torch set their hairy costumes ablaze, burning several courtiers alive; the king's own life was saved through quick action by his aunt, the Duchesse de Berry, who smothered the flames in her cloak.

Another variant of the Gaulish Dusi may lurk in the misunderstanding of fauni ficarii "fig Fauns" in Jerome's Vulgate translation of Jeremiah 50:39, describing the coming desolation of Babylon: "Therefore shall dragons dwell there with the fig fauns." Fig fauns exist nowhere except in dictionaries mentioning this passage. Is this a slip of the copyists for Jerome's fauni Sicarii ("fauns of the Sicarii", the ancient tribe of Gauls in Sicily)? Apparently, the King James' Version committee thought so, rendering the passage "Therefore the wild beasts of the desert with the wild beasts of the islands shall dwell there, and the owls shall dwell therein: and it shall be no more inhabited for ever; neither shall it be dwelt in from generation to generation." (See [1] )

Geoffrey of Monmouth, in his Life of Merlin (ca 1150), describes the agonized mourning of Merlin after a bloody battle, when

"a strange madness came upon him. He crept away and fled to the woods, unwilling that any should see his going. Into the forest he went, glad to lie hidden beneath the ash trees. He watched the wild creatures grazing on the pasture of the glades. Sometimes he would follow them, sometimes pass them in his course. He made use of the roots of plants and of grasses, of fruit from trees and of the blackberries in the thicket. He became a Man of the Woods, as if dedicated to the woods. So for a whole summer he stayed hidden in the woods, discovered by none, forgetful of himself and of his own, lurking like a wild thing."

A woodwose is described in Konungs skuggsjá (Speculum Regale or "the King's Mirror"), written in Norway around 1250:

"It once happened in that country (and this seems indeed strange) that a living creature was caught in the forest as to which no one could say definitely whether it was a man or some other animal; for no one could get a word from it or be sure that it understood human speech. It had the human shape, however, in every detail, both as to hands and face and feet; but the entire body was covered with hair as the beasts are, and down the back it had a long coarse mane like that of a horse, which fell to both sides and trailed along the ground when the creature stooped in walking."

The term wood-woses or simply "Woses" is used by J.R.R. Tolkien to describe a fictional race of wild men in his stories, called also "Drúedain". According to his legendarium, other men, including the "Rohirrim", mistook the Druedain for goblins or other wood-creatures and referred to them as Pukel-men (Goblin-men).

His fiction might imply that (in his fictional timeline) the 'actual' Druedain of ancient Middle-earth, were the origin of the legendary Woodwoses of more recent folklore.

Both folklorists and cryptozoologists apply the term "wild men" to European woodwoses. "Wild men" has a wider definition than "woodwoses", it is also used for worldwide reports of hair-covered bipeds resembling Bigfoot, but tends to be most often applied to beings that seem more human than ape, or that have strong mythological or supernatural overtones.

Part of this article consists of modified text from Wikipedia, and the article is therefore licensed under GFDL.
Retrieved from "https://www.monstropedia.org/index.php?title=Woodwose&oldid=8410"
Categories: