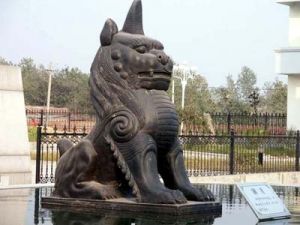 In Chinese mythology, the xiezhi is a legendary creature that act as guardian of holy places.

The xiezhi has the body of a lion, and occasionally is depicted with a unicorn-like horn.

The xiezhi is known as a guardian against disaster and prejudice and a symbol of justice and water, due to tits fire-eating qualities. In Chinese mythology, the xiezhi is credited with the ability to distinguish between right and wrong, and between virtue and evil. Legend has it that xiezhi is a divine goat which, upon seeing a quarrel or fight, would reach out its horn to touch the side which is wrong.

It is so upright that it never compromises its principle even if the wrong side is an emperor. According to the "Records of Court Attire" in the Book of Late Han, "The Hat of Law is made for those enforcing the state law...It is also known as Xiezhi Hat to symbolize justice." The Qing rule of court attire stipulated that the robes worn by imperial scribes, surveillance commissioners and law superintendents should be embroidered with the pattern of xiezhi as an emblem of their duties.

In his autobiography, Pu Yi, the last Qing emperor, also mentioned xiezhi by saying that the emperor had a statue of the mythological goat in front of his desk to remind himself that he should be fair and strict in handling state and political affairs.