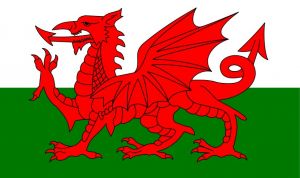 Y Ddraig Goch on the Flag of Wales

Y Ddraig Goch (IPA: [ə ðraiɡ ɡox]) (Welsh for the red dragon) is the most famous dragon in Wales.

In the Mabinogion story Lludd and Llefelys, the red dragon fights with an invading White Dragon. His pained shrieks cause women to miscarry and animals and plants to become barren. Lludd, king of Britain, goes to his wise brother Llefelys in France. Llefelys tells him to dig a pit in the centre of Britain, fill it with mead, and cover it with cloth. Lludd does this, and the dragons drink the mead and fall asleep. Lludd imprisons them, still wrapped in their cloth, in Dinas Emrys in Snowdonia (Welsh: Eryri).

The tale is taken up by Nennius in the Historia Britonum. The dragons remain at Dinas Emrys for centuries until King Vortigern tries to build a castle there. Every night the castle walls and foundations are demolished by unseen forces. Vortigern consults his advisers, who tell him to find a boy with no natural father, and sacrifice him. Vortigern finds such a boy (who is later, in some tellings, to become Merlin) who is supposed to be the wisest wizard to ever live. On hearing that he is to be put to death to solve the demolishing of the walls, the boy dismisses the knowledge of the advisors. The boy tells the king of the two dragons. Vortigern excavates the hill, freeing the dragons. They continue their fight and the red dragon finally defeats the white dragon. The boy tells Vortigern that the white dragon symbolises the Saxons and that the red dragon symbolises the people of Vortigern. If Vortigern is accepted to have lived in the fifth century, then these people are the British whom the Saxons failed to subdue and who became the Welsh.

The same story is repeated in Geoffrey of Monmouth's History of the Kings of Britain, where the red dragon is also a prophecy of the coming of King Arthur. It is notable that Arthur's father was "Uther Pendragon" (head of the dragon).

Here is a brief summary of what Perrin in British Flags and Giles-Scott in The Romance of Heraldry have written about the dragon.

A dragon was the standard of a Roman cohort which was a tenth of a legion. After the Romans left Britain it was used by both the Britons and the Saxons. A golden dragon was the principal war standard of the Saxons of Wessex, and was carried by them at the battle of Burford in 752. In the eleventh century battles the king positioned himself between his personal standard, which was the rallying point and the dragon standard which was carried by a standard bearer chosen for his strength and prowess. After the battle of Hastings the dragon standard was adopted by the Normans. No record of its use in Scotland after the battle of the Standard in 1138,where it was borne as the Scottish royal standard. A dragon standard was taken on the Third Crusade by Richard I in 1191. A dragon was borne by the English army at the battle of Lewes in 1216 and later Henry III had a dragon standard made to be placed in the re-built Abbey at Westminster. Used by Edward I, Edward III at the battle of Crécy 1346, Henry V at the battle of Agincourt 1415, and at the battle of Bosworth in 1485, after which it was carried in state to St Paul's Cathedral. Henry VII displayed the red dragon of Cadwallader, from whom he claimed descent, on the Tudor colours of white and green. Until this time it was probably golden. The supporters of the English royal arms were a lion and a dragon, but the latter was replaced by a unicorn for Scotland by the Stuarts. The dragon reappeared briefly as a supporter of the arms of the Commonwealth under Cromwell. David Prothero, 28 January 1998

Henry Tudor flew the red dragon of Cadwaladr ap Cadwallon as his banner, overlaid on a green and white field representing the Tudor House, when he marched through Wales on his way to Bosworth Field.