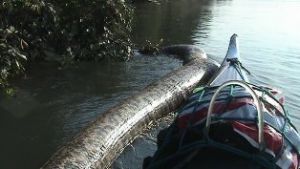 The yacu-mama or yacumama or black boa is an aquatic monster believed to inhabit the mouth of the Amazon River and the nearby lagoons.

Yacumama is translated as 'Mother of the Water' in Guarani language

Yacumama is described as a huge snake, not green like the anaconda but dark brown in color.

According to the legend, the yacu-mama would devour any living thing that passed within a range of 100m. To protect themselves, the local Indians would blow on a conch horn before entering the water, believing that the yacu-mama would reveal itself if it was present.

Cryptozooologist Mike Warner of Hillhall spent his life looking for the mythical snake.

With his son Greg and a team, they spent 12 days in March 2009 using the latest satellite equipment to take images of the huge reptile and were able to officially announce the discovery on May 2.

The explorers were dogged by hazardous weather conditions in the middle of the rainy season but eventually managed to take off by hydroplane from the Amazon River on day five of the expedition.

"Despite being buffeted by a freak storm we managed several flyovers at an average altitude of 400 feet recording video footage from two cameras at either side to the rear of the aircraft and Greg, located in the front with the pilot, taking around 300 still photographs" said Mike who had his 73rd birthday while in Peru.

After an exhausting 12 days in the jungle and a 30 hour trip back home the father and son team were finally able to examine their photo evidence in more detail, over 700 photos and five hours of video

"The data is immense and will take months to fully appreciate but already it supports our theories of 'channels' created by these giants as they make their way through the dense jungle knocking down trees 90 feet tall, but more importantly we managed to catch one of these reclusive giants on camera as it made its way through one of its watery channels."

It was Colonel Percy Fawcett, who was commissioned by the Royal Geographical Society of London in 1906 to map an area of the Peruvian Amazon in a dispute over rubber production who, after an encounter with a giant anaconda, first documented large 'trails 6 feet wide' or what are now called 'channels'.

And according to Greg it was the link made between his account and the evidence of large irregular 'channels' at the site they visited that led to the discovery.

They have now shared their findings with the Peruvian government, the National Geographic Society in Washington and Queens University in Belfast.

The team will now spend months analysing the footage and plan to return to same location in October to get thermal imagery which will help find the numbers of anacondas. This time they hope to bring with them a television crew.