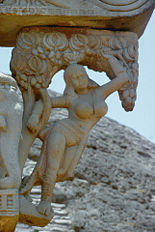 A yakshini is the female counterpart of the male yaksha, and they both attend on Kubera (also called Kuber), the Hindu god of wealth who rules in the mythical Himalayan kingdom of Alaka. They both look after treasure hidden in the earth and resemble that of fairies.

Although Yakshinis are usually benevolent, there are also yakshinis with malevolent characteristics in Indian folklore.