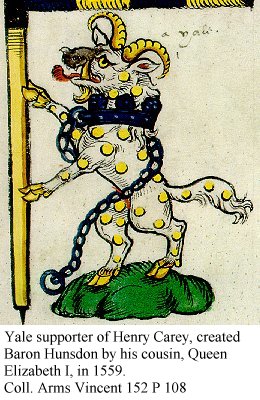 The name might be derived from Hebrew "yael", meaning "mountain goat". A Yale is sometimes referred to as a Shongmaw or Jall.

Through descriptions vary according to bestiaries, it is viewed as being an antelope-like beast about the size of a horse with tusks, long horns, and the tail of a lion or goat. Apparently it enjoyed wallowing in water.

Its long horns were not fixed but could be moved according to necessity in fights. If the first one got broken, the second could still be brought into use. But in a very fierce battle, both horns could be used at once to meet aggression from any direction.

In ancient Eastern legends, they are known to cure broken hearts of young maidens without seeking anything in return.

The yale was first written about by Pliny the Elder in his Natural History. The creature passed into medieval bestiaries and heraldry, where it represents proud defense. It was used by the British Royal Family as a supporter for the arms of John, Duke of Bedford, and by England's Beaufort family. Margaret Beaufort's yale supporters can be seen over the gateways of Cambridge's Christ's College and St. John's College. There are also yales on the roof of St George's Chapel in Windsor Castle. It was used as a supporter by John, third son of Henry IV, Duke of Bedford and Earl of Kendal (1389-1435). When the Earldom of Kendal passed to John Beaufort, he adopted the yale as a supporter. It eventually worked its way into the British Royal Family.

In modern times, the yale as a heraldic symbol is weakly associated with Yale University in New Haven, Connecticut. Neither the University's coat of arms nor most of its other heraldry features the yale, and the school's primary sports mascot is a bulldog named Handsome Dan. But a yale is depicted on the official banner of the President of the University, which is carried and displayed during commencement exercises each spring, and yales can be seen above the gateway to Yale's Davenport College. 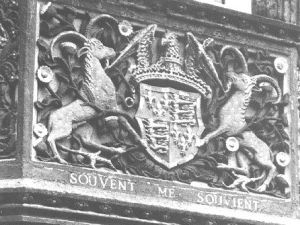 Among the same people is also a beast called the yale, which is the size of a hippopotamus, with the tail of an elephant, is black or dark brown in color, and has the jaws of a boar. It has :mobile horns, more than a cubit in length. Which in battle it alternately holds them firm and moves them, so that they are either dangerous or turned aside, however reason dictates.

Natural History by Pliny the Elder