Yali (pronounced yaali) is a mythical creature often sculpted on the pillars of Hindu temples. 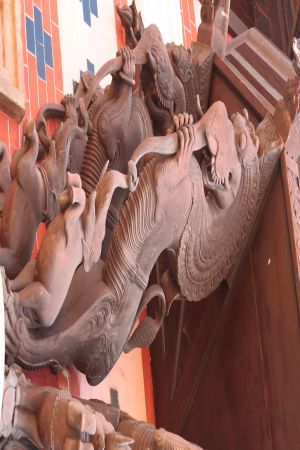 Sculpture of a Yali in South India.

Description and references to yalis is very old, but its depiction in the south Indian sculpture became prominent from the 16th century. In its iconography and image the yali has a catlike graceful body, but the head of a lion with tusks of an elephant (gaja) and tail of a serpent. Sometimes they have been shown standing on the back of a makara, another mythical creature.

Yalis are believed to be more powerful than the lion or the elephant. The Yali is the vahana of an important Hindu goddess, Durga.

Images or icons have been found on the entrance walls of the temples, and the graceful mythical lion is believed to protect and guard the temples and ways leading to the temple. Generally they are positioned on both sides of an entrance. In south India, it is very common to find the image of yalis on entrances of structures (like residential or commercial complexes), in addition to temples.